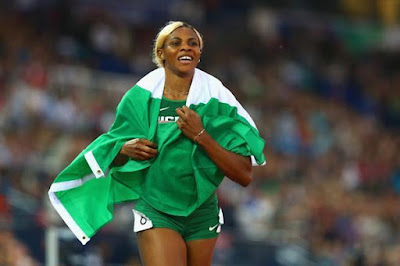 For lane infringement during the heat five of the women’s 200m race at the ongoing 2019 IAAF World Championships, Nigeria’s Blessing Okagbare has been disqualified from the event.

Okagbare who would have qualified as one of the fastest time among the losers slowed down with the line in sight and finished fourth in the race won by Niger’s Aminatou Seyni who clocked 22.58secs to hit the semifinal stage.

Okagbare, a 2013 bronze medalist was holding her hammy as she walked from the track.

Being the fifth 200m heat, the Nigerien Seyni, scorched the final 80m, coming from fifth to first and dipping to win in a national record 22.58.

Based on this, the 23-year-old has an outside chance of a medal if she can improve her curve running.

Germany’s Tatjano Pinto was ahead off the bend, continuing her strong running to the line for second in a PB 22.63.