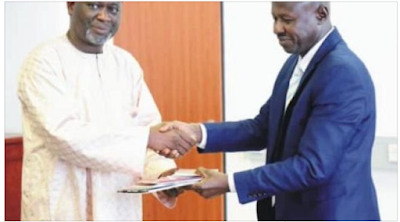 The Economic and Financial Crimes Commission (EFCC) says it retained recovered funds from the National Health Insurance Scheme (NHIS) scheme for safety reasons.
The EFCC had assisted the scheme in recovering funds from certain persons and institutions who had improper custody of such funds.
In a statement on Saturday, Ayo Osinlu, NHIS spokesman, said Ibrahim Magu, chairman of the EFCC, gave assurance that the recovered funds will be released.
Magu, who hosted Mohammed Nasir Sambo, executive secretary of NHIS, at the commission’s head office in Abuja, said the EFCC will always support the scheme.
He said the funds were retained in the safety of EFCC custody because the agency needed concrete assurance of due process, transparency and accountability in the further handling of the recovered funds.
The EFCC boss said the scheme remains a relevant institution in the health sector of the country, adding that needed efforts should be intensified.
In his remarks, Sambo thanked the commission for the recoveries in the past and its remittance to the scheme.
He said the call for the release of the funds arose from the dwindling resources of the NHIS.
Sambo said his administration seeks to ensure “the professionalization of the operations of the organisation, strengthening the state offices to be able to effectively manage operations at that level since the bulk of the work is in the field space, and the firm application of the reward and sanction mechanism to regulate conduct of all players in the industry”.