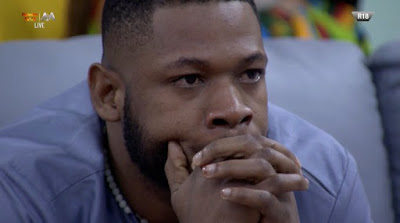 Frodd is the third BBNaija housemate to be evicted in the grand finale night.
This leaves Mercy and Mike contending for the prize.
The race for the ultimate prize is now between Mike and Mercy, as Frodd, Omashola and Seyi were evicted.
This not only brings to an end his quest for the N60 million star prize pegged on the reality TV show but also makes him the 2nd runner up for this season
In a few minutes time, the programme would be over and we would know who would be going home with the 60 million naira prize money. Seyi and Alex were few minutes ago evicted from the house.
The race for the ultimate prize is now between Mercy and Mike, who do you think is going home with the money?
Chemeka Frodd Okoye known for wearing his heart on his sleeve, Frodd has been described by fans as the real underdog of the season.
He gained fame as the most nominated housemates having been up for possible eviction almost every week.
By the fourth week of the show, most fans of the show believed that Frodd would not make it to the final five.
However, he luckily scaled through by winning the ultimate veto power of chance card, giving him the chance to put other housemates up for eviction.
For his final act as the ultimate chance card holder, Frodd pulled Diane’s name from a hat, in a game of chance, leading to her eviction.
The ex-housemate was never afraid to show emotions, and shared his opinions as bluntly as possible during his stay in the house.
He hopes to expand his business and try his hands on acting, as well as other creative ventures after the show.
Frodd’s eviction leaves Mike Edwards and Mercy Eke as the last two housemates standing.