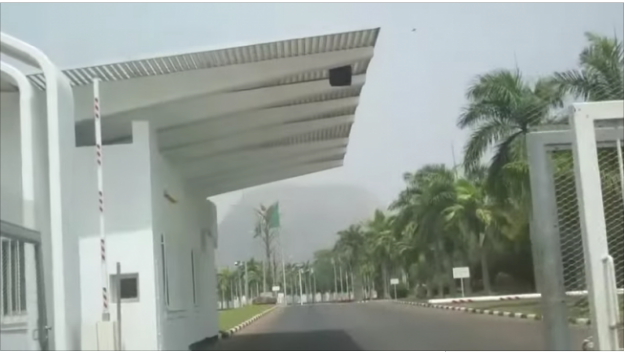 Some Nigerians have reacted to the video of Aisha Buhari, the first lady, speaking aggressively inside Aso Rock.

In an interview with BBC, Fatima, daughter of Mamman Daura, President Muhammadu Buhari’s nephew, explained that she recorded the video when the first lady attacked her inside the presidential villa in Abuja.

While some Nigerians took her action as a breach of protocol, others called on President Muhammadu Buhari to wade into the matter.

Why is Mamman Daura living in the Villa with the president tho?

What Aisha is facing in the hands of Mamman Daura and his family is what almost every married woman faces in the hands of the husband’s family. It is an eternal battle the African woman has to face to keep her family. Tough battle for the men but they MUST draw the line

For those asking why Mamman Daura and his family are living in Aso rock, try taking your TV remote to another state and see if it will control your TV from there.
Proximity is necessary for a remote to control a device effectively.

Inasmuch as may not be in the same team with @aishambuhari, but mamman Daura’s daughter breached a protocol by filming our first lady.
Protocols are meant to be obeyed.

This video of Aisha Buhari goes to confirm the stranglehold of the cabal on @MBuhari pic.twitter.com/afnHNTx4SJ

Nothing is gonna happen to Mamman Daura’s daughter. She KNOWS from whence cometh her powers.

And that’s because we have a weakling for a President.

Bikonu, is Mamman Daura married to Prez @MBuhari? Doesn’t he have a house? Must Nigerians bear the cost of his upkeep? #IStandWithAishaBuhari

Same Mamman Daura who couldn’t help Buhari’s first wife while he was in prison.

Same Mamman Daura who left them to go beg IBB & then instigated her divorce for begging the man who imprisoned Buhari.

Does Mamman have Buhari’s nude?

Lmao people that should be worried about where their next meal is coming from are busy bothering themselves about the the issue btw the first family and mamman Daura’s family, a relationship u can never understand, oya continue.

I don’t understand why a daughter of Mamman Daura will grant interview to BBC in such reckless and disrespectful manner about what happened at the Aso Rock with Aisha, no matter what, Aisha deserve her FULL respect as the first Lady, keep your internal family problems to yourself

We know it is always difficult for husbands to do but Buhari should be able to draw the line and tame his folks. Imagine the level of disrespect that Aisha Buhari is putting up with… Not only from Mamman Daura but even from Mamman’s children.

Mamman Daura’s daughter can circulate a secretly covered video of of the first lady in the presidential villa on social media in order to reinforce a fake news, without consequences

Journalists doing their job are being charged for terrorism

If Fatima, Mamman Daura’s daughter could have the gut to dare Aisha Buhari the First Lady and the securities and Buhari himself cannot do anything, how much more Mamman himself. Stranger Things happening in Asorock.

Mamman is truly the power behind the throne of Nigeria.

I have read the interview granted by Fatima Mamman Daura and I’m not surprised at her guts.

President Buhari gave so much power to Mamman Daura that makes his family disrespect the First Lady.

Na broken noise she for carry.