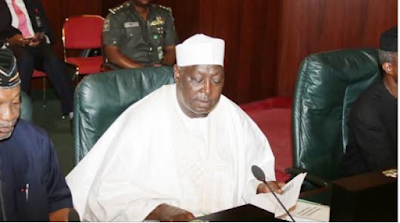 The immediate past Secretary to the Government of the Federation (SGF), Mr Babachir David Lawal, has spoken at length of how he accepted his appointment as the SGF, what he liked about the office, and how life has been for him after leaving the office.
Babachir Lawal who spoke to a number of journalists at his residence in the Adamawa State capital, Yola, concluded that life has been good as he merely returned to the businesses, including farming, that made him comfortable even before he took up the job as SGF.
He said, “I started my farm immediately after I got married. When I was getting married, people donated cows. After the marriage, I ended up with 16 cows. I said what would I do with these cows? So I started breeding them, buying more and increasing gradually. That is when I started breeding them. By the time I was SGF I had close to 200 cows: beautiful high breed cows. I started farming because of those cows.
“I realised that if I wanted to farm beans, for example, the remnants will feed my cows. If I should farm soya beans, I could use it to compound for my chicken feed. That’s when I went into farming, because of those cows, and I found myself becoming an integrated farmer.
“I produced 2,000 bags of beans last year, but they are not profitable. People were pricing them N7,000 per bag. I didn’t mind. I just stayed back there, compounded it to animal feed. I have sheep that compete in size with cows. I have goats too. I am happy to see these things. I produce them.
“So, life has been very good to me (since I returned to farm after SGF). Again, nobody stops me from my consultancy. I am back to my consultancy business.”
He said it was easy for him to accept life after being SGF because he never saw the office as one on which his life was hinged.
He explained, “Many people have the tendency when they get into government, that the system cannot do without them. I never had that tendency. I never fooled myself that I would be indispensable in that office.
“Let me tell you what I used to do. In the morning, it is traditional I would pray. I would tell God what I am going to do in the office and ask him to take control. Eight o’clock latest I would be in the office. In the evening when I returned home, I would tell God I have done my best today. If I failed you, forgive me. My mind was very clear about what I was doing in the office.
“After I left the office I began to feel that it didn’t benefit me much. Before I got to the office of the SGF, I was a very successful IT consultant. I was paid handsomely for projects I was doing, some international, some local. And of course, I was nurturing my farm all the time, too, before I digressed to the office of SGF.
He recalled also how All Progressives Congress (APC) National Leader, Ahmed Tinubu, encouraged him to accept to be SGF when he felt he was not ready for it.
He said, “Bola Tinubu did not nominate me for the office of SGF, but he supported my nomination. In particular, he convinced me to accept the job. I didn’t know what the office entailed. I had to read it up from different sources, including the website of the SGF. Still, I didn’t understand. But Bola Tinubu kept encouraging me. He kept saying I could do it.
“I had left service as a civil engineer, a principal engineer on level 12. At that level, you were not an executive. Nobody minutes any file to you. My job was a fieldwork, not office work. I said, ‘Bola, I am a field person, I have never minuted on any file.’
“But Tinubu said, ‘BD, you are intelligent. You’re fearless, you are incorruptible, and your contribution to the coming of this government is huge. And because of your qualities, you will do a lot of good for a lot of people and for our country. Don’t worry about what the office requires you to do. You will pick up quickly.’
“As Tinubu said, it was a wonderful place in the sense that I was helping people. Much of the things I dealt with were petitions of people who complained of maltreatment.
The petitions were coming and I was happy to do justice to them. They gave me a sense of satisfaction. But apart from that, there is nothing I gained personally from being SGF. I even hated the convoys that followed me around. I tried hard to stop or at least reduce it, but no way. It’s in the system and it stuck to the system.” I Joined Cult To Meet Davido, I Was Told He Is Member Of Aiye — Suspect

A 25-year-old suspected member of the cult said he was lured into the group with promises that he would meet music...