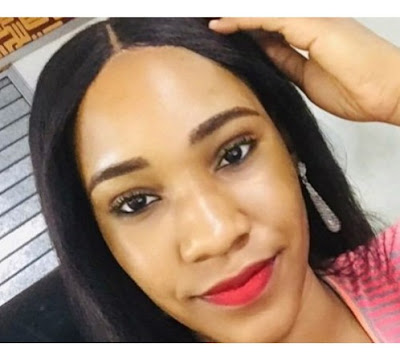 Two commuters died on Sunday, July 26, when a 20-feet container fell on a commercial bus in Ojota, Lagos, crushing them.
One of the victims has been identified as Chidinma Ajoku, aka Deedee, a staff of Federal Airports Authority of Nigeria, FAAN.
Chidinma was on her way home from work with a male colleague when tragedy struck.
According to her mother, the bus Chidinma was in had stopped to drop passengers at the bus stop when a speeding trailer carrying a 20-feet container fell and the container landed on the bus.
The commercial bus flattened by the truck.

Many people were injured but Chidinma and her male colleague died.

The bereaved mum narrated her anguish and fear as she waited all night for her daughter’s return only to be informed the following day that there was an accident and the casualties had been taken to the hospital.
When she got to the hospital, she was told her daughter isn’t one of those brought in and she was referred to another hospital in Yaba. The second hospital referred her to the morgue where she saw her daughter’s body.
Crying, the mother asked the state government to do something about the tankers and trailers on the road so that no life will be lost again in this way.
Watch video below:

View this post on Instagram
. . Chidinma Ajoku aged 27 was tragically killed in an accident in Lagos after a shipping container fell on the vehicle she was traveling in. The incident which killed 2 persons happened in Apapa #Lagos. The family is calling on the government to regulate ‘Trailer’ activities to avoid reoccurrence. . . Our thoughts and prayers are with this family at this time 🙏 . There’s a Go-Fund me page set up to support this family (pls click link in bio)
A post shared by The_CommentSection (TCS ) (@the_commentsection) on Jul 30, 2020 at 10:53pm PDT