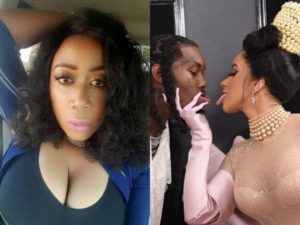 Nollywood actress Moyo Lawal has reacted to the picture of Cardi B and Offset tongue-licking on the red carpet at the 2019 Grammy Awards held on February 10.

According to the busty actress, the picture shows clearly why she doeinterfereerfer when couples are having issues.

It would be recalled that the rap couple, Cardi B and Offset separated last year when news broke out that he cheated on her. The news had many fans divided with different opinions concerning their relationship.

Reacting to their reunion, Moyo Lawal shared on Instagram:

….. Remember some women enjoy fighting , so they will fight side Chics at every given opportunity

…. Some women enjoy being beating to them , its a sign of affection

…. Some men enjoy sharing their women , to them it is a sign of having a beautiful woman

Rosy Meurer Flaunts Her Enviable Postpartum Body In New Photos   Actress Rosy Meurer has taken to her Instagram page to...