The 2019 presidential candidate of the People’s Democratic Party (PDP) and former Vice President, Atiku Abubakar has defeated President Muhammadu Buhari of the All Progressive Congress (APC) in an online poll conducted on NigerianEye.com

In a bid to test the popularity of the major presidential candidates for the 2019 presidential election, NigerianEye.com decided to conduct an online poll.

The online poll gave readers the opportunity to vote for the candidate they wanted to win the 2019 presidential elections.

The NigerianEye online poll had no room for manipulation, and the transparency of the polling was tested by participants who can see the result when they vote.

The question was – ‘Who will you vote for on February 16th?’ 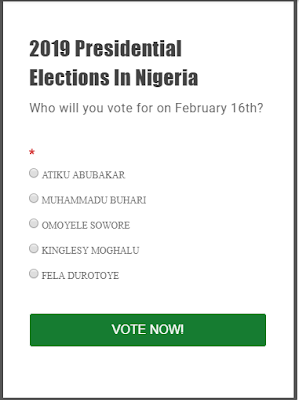 Atiku Abubakar floored President Muhammadu Buhari by a very slim margin to win the online poll conducted by NigerianEye.com
Out of a total valid votes of 17,472 – Atiku Abubakar finished winner of the NigerianEye.com poll with 8,507 votes, representing 48.6% of total valid votes, while President Muhammadu Buhari finished a close second position with 8,007 votes representing 45.8% of total valid votes
Omoyele Sowore finished 3rd position with 517 votes, representing 2.95% of total valid votes
Kingsley Moghalu finished 4th with 323 votes, representing 1.84% of total valid votes
Fela Durotoye finished 5th position with 118 votes, representing 0.67% of total valid votes
A total of 1279 votes/entries were cancelled/invalid as respondents failed to follow instructions and clicked on the ‘VOTE NOW’ button without selecting any presidential candidate.
How reliable are online polls?
Polls have become indispensable to finding out what people think and how they behave. All polls are surveys based on samples drawn from parent populations. A poll’s purpose is to make accurate inferences about that population from what is directly learned about the sample through questions the sampled persons answer.
Online polls are not totally representative and do not always represent public opinion.
“It categorically does not represent public opinion – at best, it may coincide with it,” the BBC says in its Guideline on Opinion Polls, Surveys, Questionnaires, Votes and Straw Polls.
Furthermore, The results of online polls are the opinion of the online population only and they are not a true representation of the majority of the people without internet.
For example on Nigerianeye.com – Nigerians living in the diaspora voted in our online opinion poll, while they will not vote in the election proper.
Another important factor is that readers below 18 years old can participate in online polls, whereas they cannot in the election proper.
Another issue is double voting, a reader can decide to vote with different devices and ips in order to manipulate the results of the poll
Why opinion polls are very important
Despite all it’s shortcomings and criticisms, online polling is still a very useful tool of analysis and a major source of public opinion.
In a similar opinion poll conducted by NigerianEye.com in 2015, Muhammadu Buhari defeated Goodluck Jonathan, and when Nigerians queued up to elect their president in 2015, the result was the same.
The same way that a chef can judge the sweetness of a large pot of soup by tasting just one spoonful, providing that the soup has been well stirred, so that the spoonful is properly “representative”, one spoonful is sufficient to know the taste of the soup.
Online opinion polls operate on the same principle: achieving representative samples is broadly akin to stirring the soup.
Also a chef could drink a large amount from the top of the soup, and still obtain a misleading view if some of the ingredients have sunk to the bottom. Just as the trick in checking soup is to stir well, rather than to drink lots, and by stirring well here, we have been able to sample the results of different Nigerians.
The essence of a poll is to secure a representative sample, rather than a vast one, so consequently the representative sample will be the pointer to the vast majority.
In general conclusion, while online opinion polls may not be perfect, but they are a very important way of measuring public opinion.