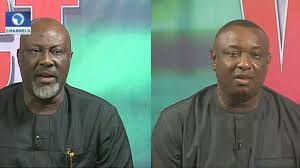 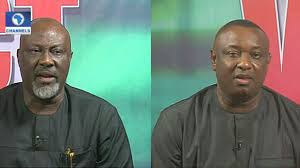 They were both guests on Channels TV’s special election programme, The Verdict.

Senator Melaye said he was “utterly disappointed” in the President, adding that he was even more surprised that he had not tendered an apology to Nigerians.

“I expected that by now the President should have apologised to Nigerians and withdraw that statement but instead there has been a lot of efforts, boxing the wind by Chieftains of the APC, trying to defend what is not defendable,” he said.

On his part, Keyamo said the President was 100% correct constitutionally, by making the comments and he would even encourage him to repeat it.

“I think I have listened to so many uninformed comments.

“What the president said is 100% correct, defensible and I will urge him to repeat it over and over again.

“The President said that whoever leads a band of thugs to go and snatch ballot boxes will pay dearly for it with his life. That is a correct statement of the law,” he stressed.

The President on Monday ordered security agencies to “deal ruthlessly” with anyone who attempts to snatch ballot boxes during the rescheduled general elections on Saturday (February 23, 2019).

“Anybody who decides to snatch ballot boxes or lead thugs to disturb it, maybe this is the last unlawful action you will take,” he said.

“I really gave the military and the police (order) to be ruthless. We are not going to be blamed that we want to rig election. I want Nigerians to be respected. Let them vote whoever they want across the parties”.