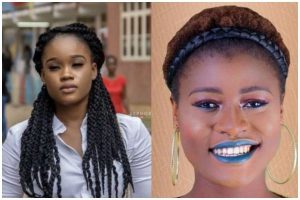 Former BBNaija housemates, Alex and Cee-C who were serious enemies both inside the house and after they got out, have finally reconciled.

They both showed up on each other’s live video this evening as Cee-C prepares for the launch of her new business, Cegar.

Apparently, they are both on set, shooting a movie, which was taking longer than expected, hence, the postponement of Cee C’s business launch.

Watch the video below;

It would be recalled that their issues started in the house when Tobi moved from Cee-C to Alex, and it continued when they came out and Leo moved to Cee-C.

This is coming months after other housemates, called for a truce between Cee-C and Alex. Former housemate, Princess had called on Alex and Cee-C to call their fans to order as these threats are actually real. She also said that the law enforcement agencies should be informed about the acid bath threat.