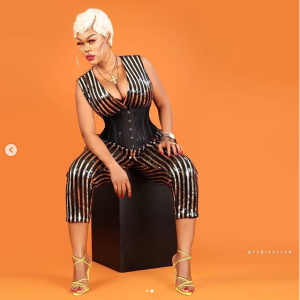 Nollywood actress, Daniella Okeke has stated that she is tired of Nigeria and she’s willing to flee the country. She apparently made the statement in reaction to the presidential election results being read by the Independent National Electoral Commission, INEC.

Daniella Okeke started off by stating how her voting experience was peaceful. She even shared the result from the polling unit which showed PDP to be victorious.

I HAD A PEACEFUL VOTING EXPERIENCE TODAY O. NO WAHALA, I EVEN STAYED TO DEFEND AND COUNT MY VOTE AND PDP WON 244 VOTE TO APC 133… HOW WAS URS?

Hours later, the curvy actress shared another post on Instagram to express her anger at Nigeria. According to her, she is willing to leave the ciuntry.

NOBODY SHOULD TELL ME TO CALM DOWN.

AM VEXING I WANT TO RUN AWAY FROM 9JA.. GHANA DO U PEOPLE WANT ME?

I NEED A NEW CITIZENSHIP AM REALLY TIRED OF NIGERIA

PLS WHO WILL MARRY ME? RED OR BLUE PASSPORT OR ANY OTHER COLOR BUT DEFINITELY NOT GREEN..

An unlucky bride fainted on the groom before her nephew defecated on her wedding gown while she was vomiting. Hollee Lynnea-Kolenda...

The Federal Ministry of Health has convened a special National Council on Health meeting. The meeting involves all health commissioners across...

If na student now, they will start screaming ‘olodo’. Eyin nko? How market? The Osun government says it will soon release...