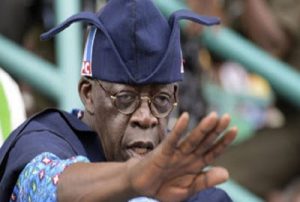 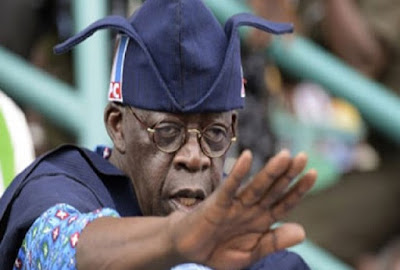 Some operatives attached to the Area ‘F’ Police Command, on Thursday, fired tear gas at some anti-Bola Tinubu protesters in Lagos.

The group, Free Lagos Orange Movement, converged on the Lagos Airport Hotel, Ikeja, to launch the ‘O to ge’ movement aimed at ending the political dynasty of the National Leader of the All Progressives Congress, Senator Bola Tinubu.

The police officers, who arrived at the venue in six patrol vehicles and one Black Maria van, blocked the entrance to the hotel for two hours and prevented customers from coming in and going out.

Some of the operatives also blocked the gate leading to the Oranmiyan Hall, the venue of the news conference by the group, preventing the conveners of the movement, including a former President of the Nigerian Bar Association, Olisa Agbakoba; the National Publicity Secretary of Afenifere, Mr Yinka Odumakin; and the spokesman for the Alhaji Atiku Abubakar Campaign Council, Mr Segun Sowunmi, among others, from gaining access to the venue.

Participants, who came for the conference, were stranded at the main gate of the hotel, causing traffic congestion on both sides of the Obafemi Awolowo Way.

Hoodlums, who were allegedly acting on the directive of the senator representing Lagos West, Senator Olamilekan Solomon, stormed the venue and asked the members of the movement to leave the entrance to the hotel immediately.

Although the members refused to heed the directive, their decision to remain at the gate of the hotel led to a confrontation with the hoodlums, which degenerated into a free-for-all, forcing the police officers to use tear gas and gunshots to disperse them.

One of the conveners of the group, Mark Adebayo, while addressing the members, decried the violence that characterised the presidential and National Assembly elections in some parts of the state, especially in Shomolu Local Government Area and Oshodi-Isolo Local Council Development Area, adding that it was time to free the state from ‘bondage’ and allow the will of the people to prevail.

He said, “I want you to challenge the political hegemony that has maltreated and cornered our resources. Are we so stupid and ignorant in Lagos to allow one man to manipulate and maltreat us this way? The clear answer is a resounding no.

“So, Lagosians, enough is enough; Lagosians arise and shine, liberate yourselves from the iron grip of one man. Stand up and free yourselves and your future from the captivity of a roguish system of power succession that lacks basic respect for the free choice of leadership.”

Also speaking, Agbakoba noted that the movement, which is aimed at dismantling Tinubu’s stranglehold on Lagos, would not be deterred by the actions of the police.

He said, “The Free Lagos Movement is a non-political movement that is aimed at ensuring that we have good governance in Lagos State. We feel that Tinubu has had his time as the emperor of Lagos since 1998, and we are trying to mobilise Lagosians to say no to the continuity of Lagos by Tinubu.

“I’m not surprised that the police would come and break up the gathering, but it won’t deter us as our purpose is to build on the result of the last elections. We hope to keep the momentum and we are backing Jimi Agbaje, because we want something new.”

Odumakin, who described the invasion of the gathering by the police as the “resurrection of the Sanni Abacha regime in Lagos,” urged Lagosians to vote out the APC in the gubernatorial election.

When contacted, the state Police Public Relations Officer, Chike Oti, noted that movement did not notify the command about its mission, hence, the police action.

He stated, “In view of the incident that happened yesterday (Wednesday) wherein some group of persons, without clearance from the police, decided to embark on a procession, and today again, we got information that a group of people would be gathering at another location.

“Since we were not notified of what they wanted to do, which would have enabled us to make adequate preparation and guide them appropriately or work along with them to make the event a success, we decided to disperse everybody to prevent any incident from occurring.

“Two sets of people gathered and at a point, they turned it into a riotous event and we had no option but to use a public order instrument to disperse them without any collateral damage.”