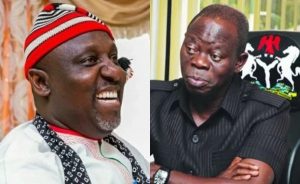 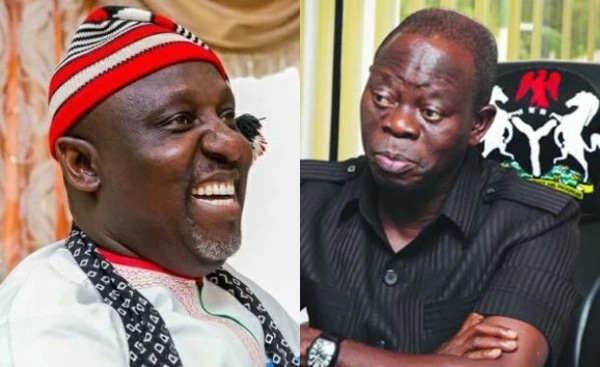 The Governor of Imo State, Rochas Okorocha, has criticised the National Chairman of the All Progressives Congress, Adams Oshiomhole, for his suspension from the party over alleged anti-party activities.

The National Working Committee of the APC, on Friday, had also suspended Governor Ibikunle Amosun of Ogun State; the Minister of Niger Delta Affairs, Usani Uguru; and the Director-General of the Voice of Nigeria, Osita Okechukwu.

But Okorocha, during an interview on Sunday Politics, a programme of Channels Television, said Oshiomhole did not have the power to remove a party member, describing the suspension as a joke.

The governor also accused the APC chairman of engaging in anti-party activities by “destroying” the party.

He said, “I just heard media reports that I’ve been suspended from the party. I think Adams is seeking relevance and looking for attention. He doesn’t have such powers to remove somebody without following the due process. If he is joking, which I think he is, I also have decided to sack him myself.

“I learnt that the reasons he adduced for my being suspended from the party is for anti-party reasons. I think Adams is the biggest player of anti-party activities in the APC. The man has simply destroyed the party to a great extent.”

According to Okorocha, the APC had a “serious setback” in the just concluded presidential election, offset only by the personality of President Muhammadu Buhari and the love of Nigerians for him.