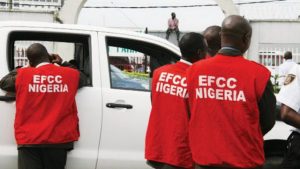 Many days after raging furore over the arrest of Alhaji Babalele Abdullahi, who is the son-in-law to the defeated presidential candidate of the Peoples Democratic Party, Atiku Abubakar, the Economic and Financial Crimes Commission on Monday owned up picking up the man.
The Commission while admitting for the first time that its operatives arrested Babalele, who is also the Finance Director of Atiku’s group of companies, justified the arrest of the man, saying that he was engaged in money laundering to the tune of€150 million.

The anti-graft agency did not however specify how the huge sum was laundered or where it originated and where it terminated.
But a source revealed that Atiku’s son-in-law was ‘taken away’ by security agents on the suspicion that he could use hard currency to unduly influence the outcome of many polls taking place in the country.
Although the EFCC had initially kept mute over the arrest of Babalele, the agency on Monday tried to douse rising tension over the detention of the man, admitting that he was in its custody but did not indicate the exact location where the man was being kept.
A source in the commission said: “Yes, he Babalele is being investigated over alleged case of money laundering and the sum involved is €150 million.
“Let it be known that investigation into the matter is ongoing and we can confirm that Babalele is in our custody. But he will be released soon,” the source hinted on Monday.
However when contacted, the acting spokesman for EFCC, Mr. Tony Orilade, who confirmed the detention of Babalele, however declined further comments on the matter, insisting that the commission does not conduct its investigation in the media.
“I do not have details for now but we shall speak at the appropriate time,” Orilade stated.
The development followed complaint by Atiku that his son-in-law had been arrested by the EFCC without any justification.

According to a statement by Atiku’s Media Adviser, Mr. Paul Ibe, the EFCC officials were, however, not given access into the house until Abdullahi’s lawyers arrived.
He said, “In a desperate move to have Atiku Abubakar concede and congratulate Gen. Muhammadu Buhari, officials of EFCC at about 8.30am today (Saturday) invaded the Maitama residence of Babalele. They were, however, not given access into the house until his lawyers arrived.
“The EFCC agents numbering about two dozen came in two regular vehicles, an 18-seater Toyota bus (registration Abuja CS 522 RSH) and a Hilux van.
They came with a search warrant to search the house and office of Babalele and found nothing incriminating.
“They then proceeded to his office at Oakland Centre in Maitama and found nothing incriminating there. However, they took away some documents of landed property.
Not done, the EFCC officials stormed his Wuse residence where they again found nothing incriminating after the search.

“Afterwards, Babalele was taken away to the EFCC office in Wuse to make a statement alongside Mr. Lawan Ayuba. It was gathered that the petition relied upon to invade the residence and office of Babalele was authored by a brother of the wife of President Buhari.