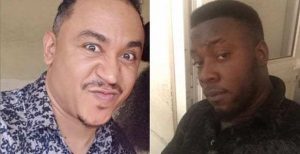 Controversial media personality Daddy Freeze has taken his time to school an online troll who did not agree with his teaching and so called him a She-pig.

The OAP while reacting to the viral story of church that was razed down but the Bibles found therein didnt get burnt, he wrote:

“Well some parts of the word of God can be found in the Bibles, while the church itself is NOT the house of God, hence why the building burnt but the scriptures didn’t! ~FRZ

Not agreeing with Freeze’s opinion the tweep called Freeze a jobless person for being a staunch critic of contemporary Pentecostal church and also compared him to a ‘she pig’.

The leader of the Free Nation, in his usual fashion of saying no to social media bullies and trolls, slammed the tweep and also educated him.

“There’s no such thing as a she pig, it’s a ‘gilt’ or ‘sow’, if u spent the time u are using to attack me studying, perhaps you won’t be the custodian of such gross ignorance. You dont know me, so how can I be the most jobless person you know? Confused, penury infested dingbat”