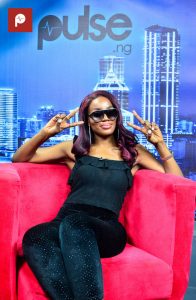 One of Nigeria’s finest multi-talented singers, Seyi Shay was a guest at Pulse studio where she had her music career, first movie and staying off controversies.

For Seyi Shay, it was not just all about her music but an avenue to promote her new artist, AceTune who she said is a singer, writer with an amazing voice. Chatting with Seyi Shay has got to be one of the most interesting and fun-filled conversations ever as she showed us her free-spirited and jovial side.

It was an indeed chilling moment with the singer as we talked about her music, the story so far, staring in a movie for the first time and she was able to co-host of Nigeria’s biggest music awards for the first time.

Thrilled by the visuals of her latest single ‘Komarole’ we asked Seyi Shay what idea was behind the video and reason for featuring Harmonise in the banging track.
“It was shot in a private Island in Lagos at one of Banket house parties actually. So it was a real party, it was a real party we just went to shoot at a real party at a private beach so shout out to Banket for making that happen. There was no real script, you know, I think I just wanted everyone to be real as possible and have fun. Obviously, on a beach in Nigeria, you would not see people with a carnival wear so, I think that was the only addition we added to just to give it some colour. But I really wanted it to be less scripted and less structured. Am like ‘Gemme Love’ was a lot more thought about. And we put a bathtub on the beach (Laughs) Nobody puts a bathtub in a beach except Seyi Shay. So, I feel the director did a great job,” she said.

Then she went on talk about how the song was initially recorded in Atlanta in 2018. According to her, after being persuaded by her team to promote the song, she listened to them and coincidentally, Harmonise was in Atlanta and at the same studio where the song was recorded. He then jumped on the song. For Seyi Shay, Harmonise was the missing link in the song before it became a reality.

Seyi Shay’s hit song ‘Gemme Love’ featuring Runtown appears to do be doing very well on Apple Music  and she was asked if she saw it coming.
“YES! Gemme Love featuring Runtown is a different type of sound because anything Sarz puts his hands on it just goes. And anything that is so different, like that but with quality people behind it, Clarence on the video, Sarz on the production, Runtown on the collaboration i just knew it was going to blow. It’s so different and it resonates with me and soul and my spirit. I remember when I was listening to it, it had just come back from the mix, I swear I cried, I swear I cried. I was listening to it with huge speakers and I was just thanking God because I knew this song was going to be this was going to be that. The song is spiritual to me sha coupled with the video and all the love it is getting by Apple Music and iTunes,” she said.

Seyi Shay also revealed why she decided to infuse a number of African artist in her last EP, ‘Electric Package’ which according to her had nothing to do with trying to feel the other side of the continent.

“I and my management wanted to do something very indigenous. A body of work that just featured DJs. And featuring DJs, I think the idea was that it would get played (General laughter) I love you guys, it featured DJ Spinall, DJ Cuppy, DJ Consequence , obviously these DJs are some of my favourite DJs, DJ Neptune, they all did a great thing by coming to help me complete that body of work. Honestly, I don’t think it was me trying to get to other parts of Africa. I just like Vanessa Mdee, I just love King Promise and I just love Destruction Boyz. So for me, it was a no brainer,” she said.

We took Seyi Shay dwon the memory lane where the whole musical journey started in Nigeria for her and wanted to know if she feels fulfilled so far or is still trying to break even into the ever-evolving industry.

“First of all I have been out here, for six years now and a lot of my journey in this six years have been ups and downs, rounds and rounds, meeting different people, different managers, different teams, different friends, bad gang, good gang. I have literally just lived these past six years but musically I haven’t touched the helm of where I’m trying to go. Although a lot of people might think that I have achieved so much. I feel like with every artist we always chasing that thing, you know, I don’t know if ever comes but I just feel like there is a time when you just feel like next level I have conquered this, I’m moving to the next level where I want to conquer a new level and some other territories.

“But I personally feel fulfilled because everything I have put out or release has been new and fresh…do you understand? And I’m really proud of myself for that. What happens tomorrow, next week, next year, where I go next, I really can’t say for now. All I know is that my team is stronger, I feel more positive, happier, much more sure of myself. For once I know the potential of everything I plan for 2019 happening is more sure…do you understand? As opposed to before when I was just shooting in the dark. Because being an independent artist and not having the team and the numbers and…you know…some people are in camps that have a super producer, super this or super that, it’s just me. Seyi Shay is just me and my guys and now Acetune. Its never been easy but I have enjoyed the ride,” she said.

For Seyi Shay, she has at one point bought the idea of giving up on music, packing her bags and leaving for good by was able to hold on and keep the music hustle alive.

“Yes! Do you not say the same thing. You that was born here, lived here, worked here. Do you not say sometimes that I’m packing my bags and I’m getting out? I think everybody does. All of us does. Like no matter how long we live for or how long we go for, Nigeria is like the only place to live in the world…for real for real. Like I have been everywhere, I can’t stay away, I’m telling you. I need my breaks o…i’m telling you. Like I have to leave for every couple of months if I’m not working but I always come back. Don’t get me wrong, I want to migrate (General laughter) I need to leave but I always come back,” she said.

We asked her what next for her music career and she revealed that she would be dropping another EP pretty soon. According to her, this EP would be different because she is going to be taking another angle.

Seyi Shay is one of the biggest singers artists from this part of the world. However, some people have always been of the opinion that she doesn’t get all the accolades that she deserves maybe because she is a loner or is being blacklisted by the cabals in the industry. So got to find out her reaction to those insinuations.

“Its a mix of both, there is a lot of competition in the industry, healthy and unhealthy. There are some people that do not want…you know…how do I put this in a very nice way, there are some people that want other people talents to outshine them. So in an industry that is very competitive, you are always going to get the whole knocking, blocking, stopping…do you understand? Those things are there in the industry, especially in my industry. Sometimes it’s also about the team you have around you.

“So as I said I have been out here for about six years and I have a couple of good managers and a couple of not so good managers but anytime you make one mistake, it kind of sets you back a little bit and that’s a problem. And I just feel like generally, timing is everything and it’s my time now. I just feel that there is a time and a season and even if the world says no and God says yes, then that is it. I’m ready now… I feel like if things had happened then, some people won’t be able to handle it and maybe even me,” she said.

We also got to talk about how she has been able to stay away from controversies since her career got to the limelight. For her, even though she has heard a number of stories about herself, it still doesn’t erase the fact that some other celebs like to be on the news just to remain relevant which she feels is all part of the entertainment industry script.

Not many saw it coming in 2018 when Seyi Shay put on a spectacular performance in the hit movie ‘Lara And The Beats.’ So we got to ask her how she was able to delve into acting for the first and still ace the role.

“Lara and the Beats was my first movie, I loved every part of it, I am so proud of myself for shooting that movie, I didn’t think I’d be able to do it. In fact, I got on set the first day and I cried and told them “I need to leave… I’m sorry can we tear off the country, I don’t want to do this” the first day and someone had to run up to me as I was taking my bag away and screamed “We’ve already set up, done everything for you” and I was like “I’m scared” but I did it. I have never acted in life but I did it. 3 months of just pure greatness and learning. The movie made it to the Pan-Africa Movie Festival and it premiered in Los Angeles this year and it’s going on to other platforms…Netflix and so many other big platforms that you guys can be able to watch the movie on,” she said.

Indeed I had a very entertaining time with Seyi Shay as she took me through the journey of her career. In case you don’t know, she works with an NGO, ‘Kent Homes’ whose goal is to assist orphans and motherless babies across the country. 2019, according to Seyi Shay is going to be a big year for her as she plans to tour with a UK based band later in the year. She also plans to have more new songs, concerts and hopes to nail bigger endorsement deals.

In a recent interview with Pulse, the talented @iamseyishay talked about her journey in the music industry and how she hasn’t been getting enough accolades . #PulseCelebs #SeyiShay #PulseNigeria #PulseOneonOne