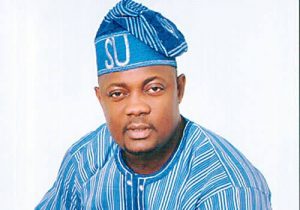 Temitope Olatoye (Sugar), Action Democratic Party Oyo central senatorial who was shot in the face and was rushed to the Accident and Emergency centre in University College Hospital(UCH), Ibadan is dead.

Olatoye, better known as “Sugar” in the political circle, was shot by suspected thugs in Elesu village, Lalupon, Lagelu local government area of the state.

Olatoye died at the Intensive Care Unit of the University College Hospital, Ibadan after he was shot in the head by suspected political thugs in Lalupon area of the state.

He was hurriedly rushed to the Accident and Emergency ward of the UCH by his supporters from where doctors on duty moved him to the Intensive Care Unit of the hospital.

The UCH Public Relations Officer, Mr Toye Akinrinlola, told one of our correspondents that the lawmaker was moved to the intensive care unit, where doctors battled in vain to save his life.

A close aide to the lawmaker (name withheld) had told one of our source that some suspected political thugs of a rival politician in the constituency allegedly carried out the attack.

He vowed never to return to the APC, notwithstanding the overtures reportedly made to him by a former governor of the state, Chief Adebayo Alao-Akala, to join him in the APC.

Before his death, he was representing Lagelu/Akinyele federal constituency. Olatoye had in 2011 won an election into the state House of Assembly on the platform of the Accord Party before he later defected to the then Action Congress of Nigeria.

He was said to be coming from his village where he had gone to exercise his franchise when the assailant ambushed him.

Two hours earlier, a supporter of the PDP, simply identified as Mudasiru, was shot dead by a police officer in Ile Titun area of Ibadan South-East Local Government Area of the state.

Mudasiru, in his late 20s, was said to be celebrating his party’s victory when a trigger-happy officer fired a shot which hit him from the back and ruptured his intestines.

An eyewitness told revealed that he was quickly rushed to a traditional doctor, Chief Kehinde Ege, in Ita Ege for treatment.

As Ege was almost getting the bullet out, the boy gave up the ghost having lost too much blood, said a source who witnessed the treatment.

The state Police Public Relations Officer, Mr Lawrence Fadeyi, who confirmed both incidents, begged for more time within which the police would make its comprehensive findings available.

“Yes, both incidents are true but kindly give us more time to come up with a detailed analysis of what really happened,” Fadeyi said.