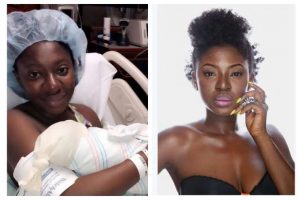 Nollywood actress, Yvonne Jegede who recently disclosed that her marriage to Olakunle Fawole better known as Abounce has crashed has revealed in a new chat with Sunday Scoop that she doesn’t regret marrying him in the first place.

The screen star and her estranged’s husband were barely married for a year before their split occurred.

Speaking on the failed marriage, she said,

“I do not regret my marriage to him. I have never regretted anything in my life. Every experience is something to learn from. There really is nothing for me to sit down and wish I didn’t do or should have done. Yes, I reverted to my original name on social media, but I am fine. Don’t I look alright?”

On why Abounce wasn’t present at the christening of their baby boy, Xavier, Yvonne said,

“I really don’t know why he wasn’t there. Maybe you should ask him. However, I don’t feel bad that he wasn’t there and as you can see, I’m in high spirits.”

“Having my baby was a journey; more like an experience, I can never forget. Motherhood has taught me endurance and patience. There are times I would want to sleep but I cannot because my baby is awake and I would have to keep him company.”

On how motherhood would affect her career, she revealed that her new status as a mother would tell on the kind of roles she accepts.

“Certainly, motherhood would impact on the type of roles I would accept. Now, I would only do big jobs that can fetch more money because school fees are coming and the bank account has to be looking nice to be able to afford the expenses. I would be a lot busier this year,” she added.

The actress also spoke on how she regained her sexy shape after childbirth. She said,

“I have always been obsessed with losing weight. After having my baby, I’m trying to snap back and get to my normal shape. Losing weight is a thing of the mind; it has to do with your subconscious. It happens in the spirit before it manifests in the physical.”