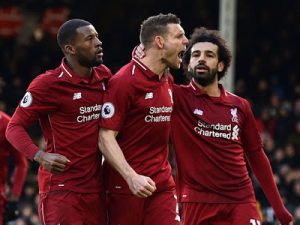 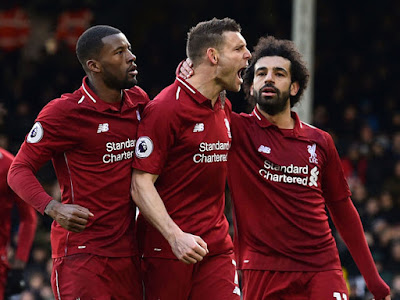 Liverpool moved back top of the Premier League in dramatic fashion as Toby Alderweireld’s last minute own goal beat Tottenham 2-1 at Anfield on Sunday.

Jurgen Klopp’s side move two points clear of Manchester City once more at the top of the table, but City have a game in hand.

Lucas Moura’s second-half goal cancelled out Roberto Firmino’s opener to leave the Reds facing the prospect of being behind Manchester City on goal difference, only for Toby Alderweireld to turn the ball into his own net in the 90th minute when Lloris failed to hold a Mohamed Salah header.

With City beating Fulham comfortably on Saturday, Jurgen Klopp’s side were in need of a positive result to keep the pressure on the champions, who play again at home to Cardiff City on Wednesday.

The only shot on target of the first half proved the difference at the interval, with Firmino running into the space between Spurs’ centre-back trio to head in Andrew Robertson’s precise cross.

Spurs did threaten, though, even if Alisson’s goal was untroubled, with Lucas and Dele Alli each coming close with efforts from the edge of the box.

Alisson had to parry a Harry Kane strike before Christian Eriksen’s follow-up was blocked by Robertson as Spurs stepped up the pressure after the break.

Salah then wasted a good chance on the break for Liverpool and Spurs punished their hosts 70 minutes in, when Eriksen’s scuffed effort from Kieran Trippier’s cut-back was fired beyond Alisson by the arriving Lucas.

The visitors should have won it themselves inside the final five minutes, but Moussa Sissoko blasted over the crossbar after being sent clear by Son Heung-min’s smart lay-off.

And Liverpool made them pay as the game ticked towards injury time, when Salah headed Trent Alexander-Arnold’s looping cross goalwards and Lloris could only push the ball off Alderweireld and over the line.