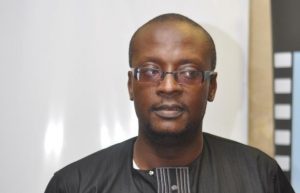 Nollywood filmmaker, Charles Novia has reacted to the outcry against SARS by stating that most Nigerians are rude to armed police officers.

According to him, such is wrong because a policeman with a gun deserves respect while he’s still holding the gun.

His post comes following the killing of Kolade Johnson who was hit by a stray bullet from a SARS officer.

One morning in January 2018, when I was still resident in Abuja in my four year hiatus in the city, I drove out of my house in Guzape, and as I drove past the NNPC fuel station, a police patrol team of men with menacing looks on their faces waved me to stop on the road.

A Policeman walked up to me, while his colleagues stood a few metres away with guns in their hands.

One of the things we Nigerians assume and do wrongly most times is to look down on the Policemen when they stop motorists. We don’t hide the disdain on our faces most times when we see them and sometimes we talk down on them.

I have always believed this is wrong. I may not like the way the Police operate at times but I don’t get rude to any of them when I see them at checkpoints. The man with a gun in his hand is to be respected for those few moments he has that gun undecided on your face.

So, when I see any Nigerian Policeman at any checkpoint, I greet them warmly. It doesn’t matter if the person holding the gun might have murdered someone. That gun in his hands is a weapon of the State, a source of his power and an authority for him to kill and think later.

‘Good morning, Officer of the Federal Republic of Nigeria’ I hailed at the stern-looking man with my beaming smile as he glanced through my window, his eyes searching the car.

‘Good morning, Sir’ he replied and stared at me for a few seconds.
‘How is work, Officer?’ I continued with the same politeness.
‘Work is hard, Sir. Oga, you seem like a good man. Drive on. I can see you have some white hairs. you are not the kind of person we are looking for.’

I was curious about how the few white hairs on my head could give me a free pass from this guy and I asked, still with a smile and my eyes on the gun he had…just in case; ‘Officer, what kind of ‘person’ are you looking for, if I may ask?’

He looked at me and a wry smile flashed on his lips. ‘Young Men. Those ones who are young and drive flashy cars or any young man at all. They are number one suspects. They are criminals. They are Yahoo Boys. Any young man is a suspect.’

I looked at the SARS insignia on his vest and sighed.

‘Have a nice day, Officer’ I said. He waved and I drove off with a burden on my mind.

If Policemen in Nigeria are going after young men for frivolous reasons, taking delight in incarcerating young people with the assumption that everyone in that range is a criminal, then the Nigerian state is at war with the youths in the nation

There is a constant mantra I grew up hearing. I think Bob Marley or Peter Tosh coined it in a song in the early 70s.

I don’t think the Nigerian Police nor the Nigerian Government know what they are dealing with if they allow this crass harassment and intimidation of the youths continue.

The anger of the youth is combustible. The day an uprising would begin against these injustice, it would have been far gone. Every young man mostly in Nigeria sees and documents what the Nigerian Police does to their generation. They keep it in their minds and perhaps say nothing

But like what happened during the Tiananmen Square uprising and the Tottenham Riots a few years ago in China and London, the brimming anger would find release one day in unison by these young people and we would have a crisis in our hands.

Because the Nigerian Police ‘too do’.

How can a young and promising man be killed in a football viewing centre by stray bullets a couple of days ago by a SARS team in Lagos because the police was looking for a young man with dreadlocks?

How can young Nigerians with dreadlocks automatically become suspects by the Police and are randomly arrested and accused of unproven crimes? I have read chilling tales of young men online giving narratives of how their dreadlocks seem to trigger the Nigerian policemen.