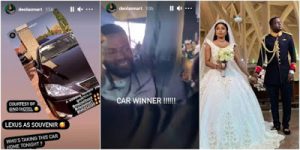 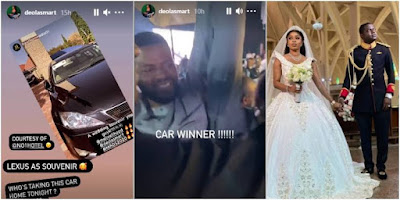 One of the highlights of their celebrity-studded wedding was when the couple decided to give away a brand new Lexus car as a souvenir during their wedding reception.

The bride was the first to give out snippets on the car gift on her Insta story hours before it was eventually given out.

The couple did not just give the lucky winner the Lexus car but also gave him a ‘start-up capital’ of N500,000 initially.

He is a fresh graduate who finished from the University of Abuja, read accounting, and is awaiting his call up letter to go and observe the mandatory National Youth Service Corps.

The couple later added N1 million to his winning cash as well as other guests. Austin eventually left the venue of the wedding with N1.8 million aside from the car.

The wealthy jeweller went all out by splashing millions of naira on a brand new Porsche Cayenne for the woman after his heart, Deola, on a very special day in their lives.

A post shared by The Tattle Room 🇳🇬 🌎 (@thetattleroomng)