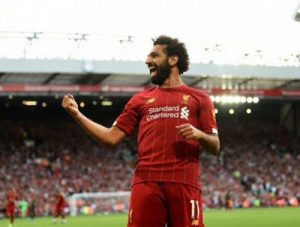 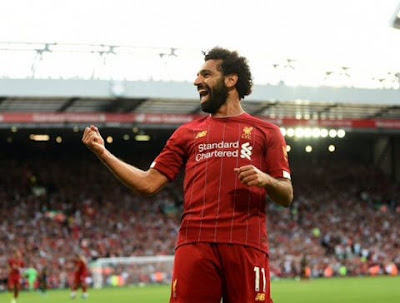 The African opened the scoring inside the first minute of Reds’ clash against Midtjylland.

The club made this known in a tweet on Wednesday, describing the attacker as a “record breaker”.

It took Salah 55 seconds to break Gerrard’s record of 21 goals.

With this, Salah has also become the quickest scorer for Liverpool in a UEFA Champions League game.

A much-changed Liverpool were left hanging on to deny Midtjylland a first-ever Champions League group stage win as the Reds escaped with a 1-1 draw in Denmark on Wednesday.

Alexander Scholz’s penalty levelled for the Danish champions just after the hour mark before Scholz had a winner ruled out for offside and rookie Liverpool goalkeeper Caoimhin Kelleher saved Erik Sviatchenko’s powerful header.

Liverpool were already guaranteed top spot in Group D, while Midtjylland bow out of European competition as they finish bottom of the group in their first Champions League apparance.

Jurgen Klopp made eight changes from Sunday’s 4-0 thrashing of Wolves.

However, surprisingly given the German’s numerous complaints about his players’ workload and a busy December programme, he retained Fabinho at centre-back and Salah up front.

The Egyptian made an immediate impact as he seized upon an attempted backpass by Scholz and raced clear to trickle a shot past the goalkeeper.

However, the substitution of Fabinho at half-time to give the Brazilian a rest created some disruption in a youthful Liverpool defence.

Sory Kaba smashed a shot against the crossbar after hesitation from Koumetio early in the second-half.

Midtjylland’s pressure was eventually rewarded with the penalty but only after the first of a series of lengthy VAR reviews.

Anders Dreyer was brought down by Kelleher as he bore down on goal, but had originally been ruled offside.

After reviewing the incident on the pitchside monitor French referee Francois Letexier pointed to the spot and Scholz drilled the spot-kick low beyond Kelleher.

The next VAR review went against the home side when Scholz’s fine finish from a narrow angle was ruled out for offside.

Kelleher was the hero in a 1-0 win over Ajax which secured qualification last week and was needed again when he parried Sviatchenko’s header from a corner.

Klopp turned to the experience of Andy Robertson, Jordan Henderson, Roberto Firmino and Sadio Mane after the break to restore some control and Henderson produced a last-ditch challenge to prevent Evander securing a famous win for Midtjylland.

But Liverpool could even have won the game late on when Takumi Minamino swept home from Mane’s knock down.

Minamino was initially given offside, but on review the goal was instead controversially ruled out for a handball by Mane.

Eight minutes of stoppage time were then added on to make up for the lost time in reviews, but Midtjylland failed to repeat their famous win over Manchester United in the Europa League in 2016 as they had to settle for a point against the English champions.