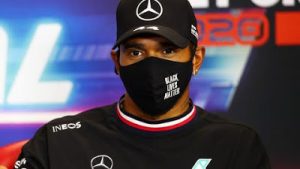 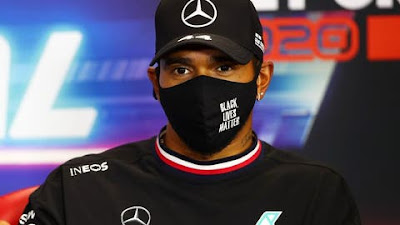 A happy Lewis Hamilton said he was ‘super-excited’ to be back in action on Friday after he was second-fastest for Mercedes behind his team-mate Valtteri Bottas in practice for this weekend’s Abu Dhabi Grand Prix.

The seven-time champion, who missed last weekend’s action-packed Sakhir Grand Prix due to a bout of Covid-19, admitted he needed a few laps to settle in again.

“I was very happy and grateful to be back out there and to finish the season feeling strong,” he said.

“I felt super-excited like it was my first day back at school.

“It took a while in the first session to get used to it again, but the second was better so not too bad overall… We got most of our stuff done.”

He added that it had been a “bit of a messy day with a lot going on, but we came through it like we always do.”

Asked by Sky Sports F1 about his reaction to seeing fellow-Briton George Russell in his car last weekend, Hamilton said he had been impressed.

“I think George did an amazing job as everyone knows,” he said.

“He was at home in the car. For me, it was definitely odd because I’ve never missed a race in my 27 years of racing.

He said he felt no need to impress this weekend, but wanted to enjoy the season-closing event.

“I don’t think I need to do any more than I have done this year,” he said.

“I don’t think that is important at all – I just want to enjoy it, and be here, and be with my team again. It’s a privilege.”

Bottas clocked a best lap in one minute and 36.276 seconds to outpace Hamilton, back after a bout of Covid-19 that forced him to miss an F1 race for the first time, by 0.203 seconds.

Max Verstappen was third for Red Bull, seven-tenths adrift, at the end of a session that began and finished with tyre-testing and was also interrupted by a red-flag period after Kimi Raikkonen’s Alfa Romeo’s Ferrari engine burst into flames.

Daniel Ricciardo was ninth for Renault ahead of Lance Stroll in the second Racing Point while Russell, last weekend’s ‘heartbreak hero’, ended the session in the Williams pit after power problems.