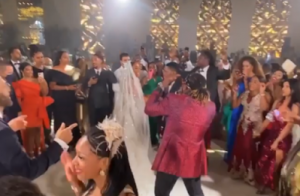 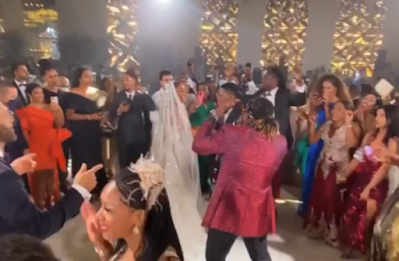 Paul Okoye, a Nigerian singer better known as RudeBoy, has come under criticism for performing ‘No One Like You’, at a presidential wedding he graced in Equatorial Guinea.

The 39-year-old singer had taken to his Twitter page on Sunday to share a video of himself performing the song, which was recorded by PSquare, the now-defunct music group he shared with Peter Okoye, his twin brother, at the wedding ceremony.

Shortly after he shared the video, fans took to the comment section to demand the reason for performing a song that belonged to a group he was no longer a part of.

While a segment of users registered their annoyance, saying he wasn’t supposed to perform the song alone, others supported him up with the assertion that they both have equal rights to the song they created together.

“Why are you performing Psquares song alone? This is betrayal though if you don’t know,” a Twitter user wrote.

“They both have equal right to songs of defunct psquare. Can’t you guys just get sense and move on already,” said another user.

The development comes a few days after Peter, better known as Mr P, had slammed critics who constantly ask him to reconcile with Paul and “bring back” Psquare.

Here are some of their reactions below:

Why are you performing Psquares song alone? This is betrayal Though if you don’t know.

Psquare should be performing this not rude boy pic.twitter.com/proHQs9ut4

Rudeboy of Psquare performed he and Mr P’s song at the presidential wedding in Equatorial Guinea.

I’m just angry they separated in the first place. Stop singing your old songs to remind me of psquare that is dead😭

This is one of the reasons they separated, Paul(RudeBoy) and his other brother have always been rude and disrespectful to Peter. This alone is the summary.

You are totally wrong performing this song, what if peter decided to take it to another level people will now start saying is insensitive doing that🙄, why you no perform Audio Money,Reason with me and the rest.
MR P is trying to push his own music to the masses. This life sha😩

Bro that song belong to Psquare not rubyboy. Sing yours and leave Psquare let it rest in peace.

This is very heartbreaking, how could one person be performing a song by a duo!! Fear woman in this life!

This is very wrong @rudeboypsquare . You two recorded and sang the song together and if after break up , Music contract I know would say that no 1 amongst u should perform the song alone . Irrespective of what is happening, I believe agreement should be respected