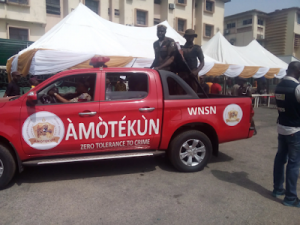 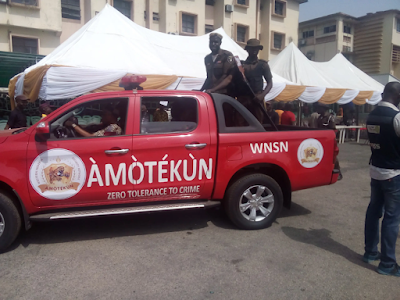 The Oluyin of Iyin-Ekiti, Irepodun/Irepodun local government area of Ekiti, Oba Adeola Adeniyi Ajakaye has called for the localization of the recruitment process into the Amotekun corps for it to achieve the desired result of securing lives and property in the society.

The monarch who commended the governors of the South-West states for the creation of the security outfit said a lot must be done to strengthen the Amotekun corps in accordance with modern-day policing techniques.

Oba Ajakaye while addressing journalists in his palace said the traditional institutions must be adequately carried along in the recruitment and administration of the corps, saying personnel should understand the culture, tradition and custom of the people they want to protect against criminals.

While lamenting the wave of kidnappings, killings and other heinous crimes across states in the country, the Oluyin said the time has come for the government at all levels to increase funding for security, advising residents to provide timely information to security agents on strange movements in their vicinity.

According to him, “The truth is we need to work on the structure of policing from the recruitment, operations and funding for us to achieve the desired result in the society. The policing of the community needs to be upscaled.

“On the issue with Amotekun, we must say that the concept is a good one by our governors looking at the level of insecurity in the region. But we must ensure that the people that will be engaged for Amotekun must be people who understand the area they want to work in. The recruitment must be localised and traditional rulers should be involved.

“Besides that, there is a need for the personnel to be given modern-day gadgets for effective policing, that is how they can be effective in tackling crimes such as armed robbery, kidnappings, farm invasion and others.

“Let me advise the government that funding for the new security outfit must be adequately provided so that the personnel would not compromise.”

Speaking on the recent attack on the only financial institution in the town by armed robbers, Oba Ajakaye expressed regret over the incident, saying the people of the community have been thrown into confusion as regards their banking activities.

According to him, the community was engaging with the management of the bank on quick reopening, adding the community would collaborate with other security outfits in protecting the bank.

“It was an unfortunate incident that the only Bank in Iyin-Ekiti was attacked by robbers. The interesting thing is that this only Bank is what people in other adjoining towns make use of for their transaction and you can imagine what the people are facing now when the bank is not operating.

”We are meeting with the management of the bank on the need for them to return to work but part of their demands is the provision of more security and we have assured them that we are making arrangements for our people to protect the bank. Hopefully, in the next few months, they will be back working,” he said.