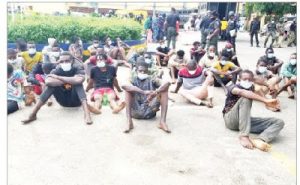 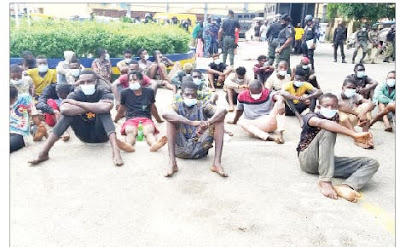 The Lagos State Police Commissioner, Hakeem Odumosu, on Wednesday, paraded 103 suspects for allegedly violating the state government’s order to curb the spread of COVID-19, dispossessing unsuspecting members of the public of their valuables, burning and looting of police stations during the unrest that followed the #EndSARS protests in the state.

were arrested for armed robbery and unlawful possession of firearms.”

The CP said three suspects, Kingsley Ojukwu, Anocha Uko, Chinyere Ogueri, were arrested for dispossessing a female victim of N70,000, adding that the victim boarded the same vehicle conveying the suspects to a destination in the state when they perpetrated the crime.

Odumosu stated, “A female victim, who was returning from work, boarded a Toyota Camry car with number plate LSR 684 CQ on the Airport Road and she met four other persons seated as passengers. As the journey began, they announced to her that they were robbers and ordered her to surrender all her valuables or she would be killed. They successfully dispossessed her of the sum of N70,000 and pushed her down from the moving vehicle.

“Upon the receipt of the report, police operatives were detailed to be on the lookout. Interestingly, on December 14, 2020, around 7am at the Ogba area of Lagos, the same victim boarded the same vehicle and she quickly identified the occupants as the robbers, who previously robbed her. She raised the alarm and operatives of the CP Special Squad, who were on duty around the area, apprehended three of the robbers, while others escaped. During interrogation, they gave their names as Kingsley Ojukwu, Anoche Uko and Chinyere Ogueri.”

He said, “On November 12, 2020, information was received from a reliable source that some armed men were sighted on Bamgbose Street, Lagos Island, planning to attack and rob unsuspecting victims in the area. Police operatives were drafted to closely monitor the area.

“Shortly, two of the suspects, Hassan Omileye and Abiodun Ayodeji, were arrested while others escaped. One locally-made Berretta pistol with three pieces of live ammunition was recovered from them. They are assisting the operatives to arrest their fleeing gang members.”

Similarly, Odumosu said four suspects, Ibrahim Arowolo, 21; Yusuf Azeez, 21; Ibrahim Yakubu, 23; and Sowemimo Faruk, 20, were arrested for allegedly conspiring to rob a victim of her vehicle in the Sango-Ota area of Ogun State.

“Acting on a tip-off, the CP Special Squad swung into action and electronically tracked the gang of robbers to the Surulere area of Lagos, where four of them were arrested and a stolen Toyota Highlander SUV with number plate KJA 38 FZ was recovered from them.

“Other items recovered from the robbers are two cut-to-size locally-made pistols, two cutlasses and different phones suspected to have been stolen. During interrogation, they gave their names as Ibrahim Arowolo, Yusuf Azeez, Ibrahim Yakubu and Sowemimo Faruk. It was revealed that the suspects are notorious in car-snatching in Lagos and neighbouring states.”

Odumosu added that 18 suspects, including Samuel Jombo, 46; Chibuke Agbo, 40; Tony Azubike, 38; Loveth Nwankwo, 38, were arrested at a nightclub for violating the COVID-19 restrictions in Lagos State.

“In continuation of enforcing the COVID-19 protocols, which among others, placed a total ban on clubbing, police operatives attached to the Ejigbo Division, on Tuesday, December 22, 2020, around 11.30pm, arrested 18 suspects at the Romeo and Juliet Club around the NNPC junction, Ejigbo, for violating the COVID-19 order. The suspects will be charged accordingly.”