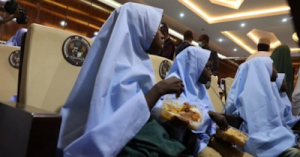 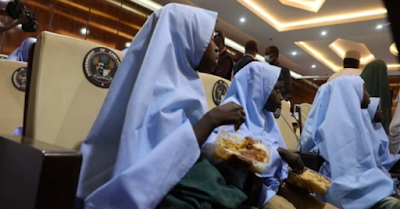 Hunainatu Abubakar, one of the abducted girls of Government Girls Secondary School, Jangebe in Zamfara, says their abductors asked them to pray for them to become good citizens.

Hunainatu told the News Agency of Nigeria (NAN) that they were ridiculed and called many bad names.

”They threatened to kill us and then later, they asked us to pray for them to be good citizens and that we should teach them English so that they could speak.

“They also threatened to rape us but their leader warned them against that, they always added sand to our foods and only allowed us to dig for water with our fingers at a drying pond,” she said.

“Some of the bandits even asked if we will marry them but none of us responded and so they said they would be looking for those with big eyes and kill them.”

Hunainatu further explained that although they were taken at night through the back of their school, she could trace the location and can still remember their faces if she saw any of them.

She said one of the students also saw her father who was kidnapped over three months ago but he cautioned them against showing any relationship with him to avoid being killed.

Hunainatu explained that most of her school mates returned from captivity with wounds and swollen legs because they were asked to leave their shoes on the day of the kidnap.

She revealed that the abductors made them sleep in the open and but hid them whenever the sound of a helicopter in a search and rescue mission flew past.