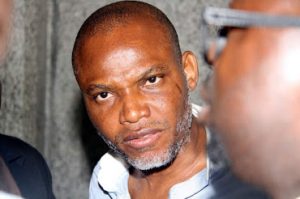 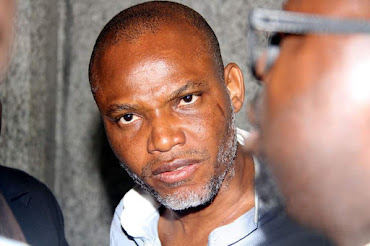 Leader of the Indigenous People of Biafra (IPOB), Nnamdi Kanu on Monday said the blockade of farm products from North to South by the Fulani should be considered an act of war.
Kanu, in a tweet, said Nigerians knew that the Fulani did not farm, but that it was the same Fulani blocking farm products from North to South.
He wondered why President Muhammadu Buhari tolerated this act.
Kanu said if the South blocked oil and gas, the north would levy massacre.
“Nigerians know that the Fulani do not farm. Yet, it’s the Fulani that is blocking movement of farm products from North to South.
“Such blockade should be considered an act of WAR, yet the Fulani Nigerian President tolerates it. If the South blocks oil & gas, they will levy massacre.”
Coordinator of the Kwara State chapter of Miyetti Allah Association of Cattle Breeders, Aliyu Mohammed, had on Sunday said that the blockade of cattle and foodstuffs to the South West through Kwara State would continue until the safety of Fulani is guaranteed in the region.
Mohammed, speaking to newsmen after a crucial meeting of the association in Ilorin on Sunday, said the action is a warning shot to ensure a peaceful operation of businesses by the Fulani and to end the harassment of the tribe in the south.
He also said not all Fulani are criminals, adding “Just as you have in any society where there are good and bad people.”
Mohammed insisted that “It is not only Fulanis that commit crimes in the country, but it was sad that everything happening now is heaped on Fulani herdsmen.”