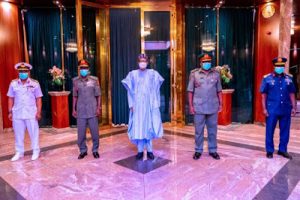 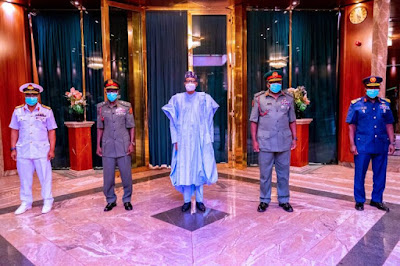 President Muhammadu Buhari is currently presiding over the first national security council meeting being attended by the new service chiefs.

Buhari is meeting with the security heads alongside other top government officials at the presidential villa in Abuja.

The meeting is taking place about a month after the new service chiefs assumed office on January 26.

At the ongoing meeting are Vice President Yemi Osinbajo; Secretary to the Government of the Federal, Boss Mustapha and Chief of Staff, Prof. Ibrahim Gambari.

Others are: Defence Minister, Major General (rtd) Bashir Magashi; ministers, the service chiefs, Inspector General of Police, Mohammed Adamu and other heads of the security agencies.

Personal Assistant on New Media to the president, Bashir Ahmad disclosed this on his twitter handle.

He wrote: “President @MBuhari is currently presiding over the National Security Council Meeting at the Council Chambers, the State House, Abuja.

“VP Osinbajo, SGF, COS, Defence Minister, the Service Chiefs, the IG of Police and other heads of the security agencies are all in attendance.”

The nation has more than ever been divided towards ethnic line following rising wave of insecurity in different parts of the country, especially in the north where bandits have killed lots of people.