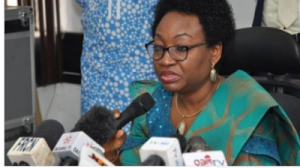 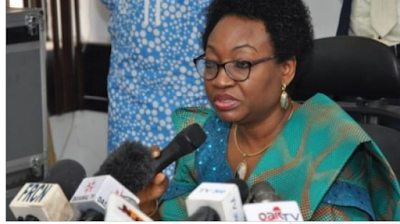 Taiwo Taiwo, judge of a federal high court in Abuja, has ordered a stay proceedings in the case of Winifred Oyo-Ita, former head of service, who is standing trial on allegations of fraud.

Taiwo made this order on Wednesday following a freezing order which the Economic and Financial Crimes Commission (EFCC) obtained from a sister court.

On March 23, the EFCC arraigned Oyo-Ita and eight others on 18 counts of money laundering to the tune of N570 million before Taiwo in a suit marked: FHC/ABJ/CR/60/2020.

Subsequently, the anti-graft commission filed an ex parte motion with suit number: FHC/ABJ/CS/1202/2020 before Folashade Giwa-Ogunbanjo, another federal high court judge, for the freezing of the bank accounts of the fourth, fifth and sixth defendants in the suit before Taiwo.

Garba Umar and his companies; Slopes International Limited and Good deal Investments Limited are the fourth, fifth and sixth defendants.

Taiwo said the application amounts to an abuse of court process.

“The exhibit attached includes the charge sheet and proof of evidence in this charge before this court,”  the judge said.

“It is on record that the defendants, in this case, were formally arraigned on March 23, 2020, and they all pleaded not guilty.

“This court was informed and became aware of the freezing order on December 1, 2020, by counsel to the fourth, fifth and sixth defendants.

“There is no doubt that this matter had commenced, charges read were reacted to and applications made were granted before the prosecutor went ahead to secure the freezing order.

“The learned prosecutor went and filed a fresh application which was assigned to another court.

“Is this not an abuse of court process?”

The judge said: “It is the law that once a court is seized of a matter, any application relating to that matter, must be filed before the court.”

“The application made ex parte which was assigned to another court in October 2020, months after the defendants including the fourth, fifth and sixth defendants had appeared in this court, was made in bad fate,” Taiwo said.

“I see it as a slap in the face of this court for the prosecution to have even brazenly referred to the actions of this court in his origination summons made ex parte dated September 18 2020.

“I am not unaware of the plans of the EFCC to apply for freezing warrant during investigations and even where defendants are formally before the court.

“If the prosecution feels so strongly about the need to secure an order freezing the accounts of any of the defendants they ought to have brought the application before this court and not before another court.

“What the prosecution wants by its originating summons ex parte can also be achieved in this court.

“There would not have been any problem if the ex parte application preceded the charge before this court.

“The courts have been enjoined to deal with situations of this nature where its process is abused.

“In the circumstance, I do not see how I can continue with the trial in this manner. The only thing I hereby do is to stay further proceedings in this matter until the prosecutor does the needful.

“What he chooses to do in line with the law is his choice.”