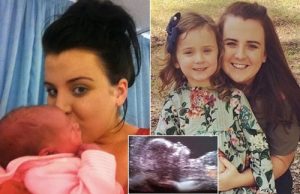 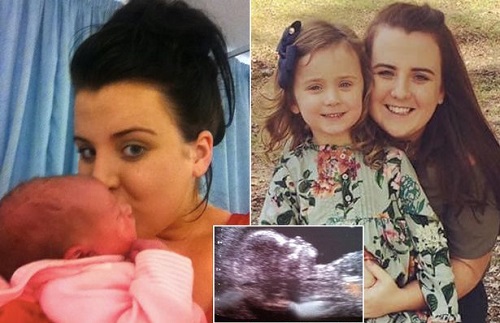 A mum who says she fell pregnant without ever having had full s.e.x has been nicknamed “Virgin Mary”.

Nicole Moore couldn’t believe it when she learned she was expecting a baby eight years ago as she says she was still a virgin at the time.

The supply teacher from Portsmouth, Hampshire, suffered from a condition called vaginismus which causes the vaginal walls to involuntary constrict. It’s believed to affect roughly one in 500 women at some point in life.

This meant she was never able to insert a tampon, have a pap smear, or ever have full se,x.

When she got together with her partner, Nicola says they found other ways to be intimate with each other that didn’t involve penetrative s.e.x, and against the odds she still managed to conceive.

So it came as the shock of her life when she took a pregnancy test one lunchtime at work and it came back positive.

“I’d spent all my teenage life not being able to insert a tampon, so I knew something was not quite right,” Nicola, now 28, said.

“But doctors told me I was fine, so I just believed for a while that there was something wrong with me.

“When I was 18 I got into a relationship with my daughter’s dad. We began trying to have s.e.xual intercourse, he was a few years older and more experienced.

“We tried but it was impossible. I didn’t understand why it couldn’t happen.

“The only way I can describe it is like it felt like he was hitting a brick wall.

“I went back to the doctors who then gave me an examination but again told me everything was fine.”

When Nicola started suffering heartburn and other tell-tale signs, her colleague suggested she might be pregnant but she laughed it off, she says.

But when the test revealed she was expecting, she began panicking about how she would be able to give birth – and more puzzling still, how she had come to be pregnant in the first place.

“I couldn’t believe it, I was so shocked and confused,” she said.

“All I kept thinking was how on earth am I going to deliver this baby if I couldn’t even have intercourse?

“I was worried my partner would think I’d cheated on him, as it seemed so impossible.

“But thankfully he knew me and my body, and he didn’t doubt me for a second.

“So many people still tell me I’m the Virgin Mary which really makes me laugh. It was crazy.”

Medical professionals who Nicola initially asked for help couldn’t believe that she had never had full s.e.x, she says.

But after seeking a second opinion, it was confirmed that while rare, foreplay and other activity can introduce s.e.xual fluids to the vaginal area.

“I really struggled throughout my pregnancy with professionals believing my story,” Nicola said.

“My boyfriend at the time often had to come with me to appointments to explain that we really hadn’t had s.e.x.

“I remember going for a check-up at the hospital and not being able to have an internal examination because the nurse couldn’t insert her finger.

“I tried explaining to her that I still hadn’t had s.e.x and she said to me ‘don’t be ridiculous of course you have.’

“I thought I was never going to get anyone to believe me or get answers.

“I had a routine check-up at the doctors for a pregnancy related illness and happened to be seen by a student doctor who had recently been studying vaginismus.

“I told him about my struggles, and he told me that I likely had this condition.

“I went home to google the symptoms and couldn’t believe what I was reading.”

The unexpected pregnancy turned out to be a blessing, with Nicola finally able to get some of the answers she had been searching for her whole life.

She was diagnosed with vaginismus when she was four months along and began seeing a therapist who helped her talk through the issue.

At five months pregnant, Nicola was finally able to lose her virginity.

And despite her fears about labour, she gave birth to a healthy little girl Tilly, now 8, with no complications.

Nicole is now sharing her story to help raise awareness of vaginismus.