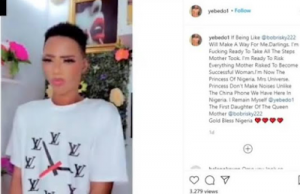 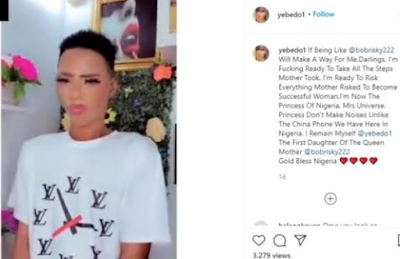 One of the beneficiaries of Bobrisky’s tattoo reward scheme, Lord Casted has become a full time crossdresser.

Casted in an Instagram post says he is will to risky all Bobrisky risked to become successful.

Before Casted tattooed Bob’s name on his body and met him for a cash reward, he had partially been involved in crossdressing and photos on his Instagram page says the exact.

But now he says after meeting someone he calls mom (bobrisky), he is willing to give it all it takes and become a full crossdresser. Sharing a video of himself, he wrote;

“If Being Like @bobrisky222 Will Make A Way For Me.Darlings, I’m Fucking Ready To Take All The Steps Mother Took. I’m Ready To Risk Everything Mother Risked To Become Successful Woman.I’m Now The Princess Of Nigeria, Mrs Universe. Princess Don’t Make Noises Unlike The China Phone We Have Here In Nigeria. I Remain Myself @yebedo1 The First Daughter Of The Queen Mother @bobrisky222

Watch the video below …