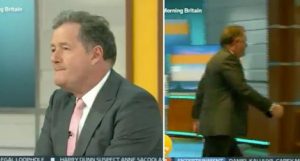 In the interview, Meghan revealed she had experienced suicidal thoughts due to the abuse she received after marrying Prince Harry, detailed how the palace failed to support her while she was experiencing racist abuse, and alleged that members of the Royal Family shared “concerns and conversations” about “how dark” her unborn child’s “skin might be when he’s born”.

Morgan declared on Monday (8 March) that he did not “believe a word” Meghan said during the interview. He added: “I wouldn’t believe it if she read me a weather report.”

He said: “[Harry and Meghan] have had an overwhelming amount of negative press.

“I watched the programme yesterday, and yes, they had some great press around the wedding… but everything that has followed since has been incredibly damaging to Meghan’s mental health and to Harry.”

Beresford told Morgan he understands the he doesn’t “like Meghan Markle”, something he said he has made “clear a number of times on this programme”.

He added: “I understand that you had a personal relationship with Meghan Markle, and she cut you off.

“Has she said anything about you after she cut you off? I don’t think she has, but yet you continue to trash her.”

At this point, Morgan stood up and stormed off the set, saying: “OK, I’m done with this.”

Beresford continued as Morgan walked off, adding: “Do you know what? That’s pathetic. This is absolutely diabolical behaviour. I’m sorry, but Piers spouts off on a regular basis.