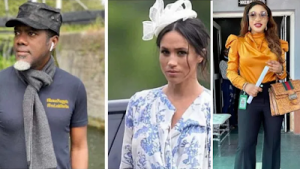 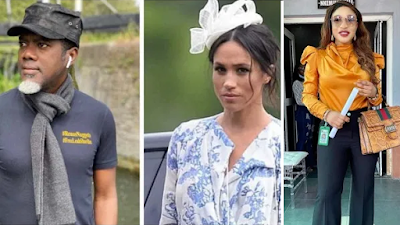 Reno who was wading into the Meghan Markle/Royal Family crisis said a similar one happened in Nigeria and then used Tonto Dikeh’s marriage as an example.
He said Tonto had thought Churchill was actually Obasanjo’s son and wanted her own children to bear the name — a name that will open doors for them, but soon as she realised he wasn’t his son the marriage fell apart.
Taking to his Instagram account, he wrote:

”We have seen it in Nigeria before. A certain celebrity married a certain man, thinking he was the son of a former Nigerian President. She had thought her children would have that name brand, that would make them and her like royalty.

But when she found out that the man was not the son of who she thought he was, and that her son would not have that esteemed title of being the grandchild of a former President, the scales fell off her eyes and the marriage became unbearable.

Look, even if Queen Elizabeth II and her entire family kneel down to greet Meghan Markle each morning, and tremble before her, as long as the Queen does not change that 1917 law that prevents great grandchildren of the monarch (except great grandchildren from the direct male heir to the throne) from becoming prince and princesses, Meghan would still have found a way to accuse them.

She did not know about that law. She schemed, but was blindsided, and caught off guard. In fact, she confessed during the interview that she did not have sufficient knowledge of royal family protocols. She just assumed her children would automatically get the title. And as we all should know, assumption is the mother of frustration.”