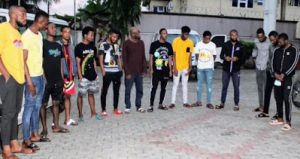 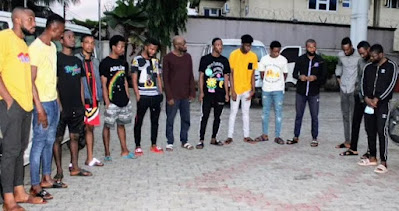 Anthony Joshua, a medical practitioner,  Mbewu Chijioke Precious and 12 others have been sentenced to prison for cyber crime by justice Simon Amobeda of the Federal High Court sitting in Calabar, Cross River State.

The Uyo Zonal Office of the Economic and Financial Crimes Commission EFCC, had secured their conviction and sentencing.

The convicts were arrested on February 17, 2021 at Umuguma area of ‘World Bank, in Owerri, Imo state following a petition by a concerned Nigerian on their illicit activities.

During questioning, the convicts confessed to the crime.

They all pleaded guilty to separate one-count charge bordering on impersonation, obtaining by false pretence and fraud preferred against them by the EFCC.

In view of their pleas, Segun Akinrinlade and Joshua Abolarin, the prosecuting counsel reviewed the facts of the case and urged the court to convict them accordingly.

The defence counsel, Innocent Eze and C. N. Nweke Junior prayed the court to temper justice with mercy as the defendants were first time offenders and had shown remorse.

The Court also ordered that the convicts forfeit all instruments used in committing the crime to the Federal Government of Nigeria.