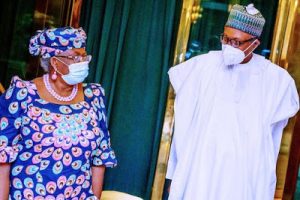 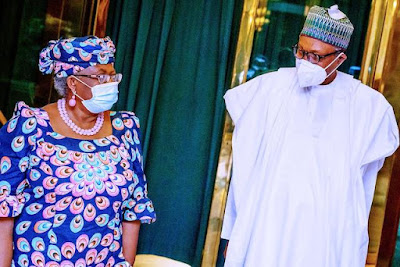 Ngozi Okonjo-Iweala, director-general of the World Trade Organisation (WTO), says she may not have clinched the job without the intervention of President Muhammadu Buhari.

At the time of Okonjo-Iweala’s nomination, there were rumours on social media that Buhai played no role in her emergence.

There was even speculation that it was former US President Donald Trump, not Buhari, that nominated her for the job.

But speaking on Monday when Buhari hosted her in Abuja, Okonjo-Iweala acknowledged that the president campaigned for her tirelessly.

She confirmed that Buhari wrote several letters and called many world leaders to support her candidacy.

“You nominated me, you wrote hundreds of letters, called up hundreds of world leaders. Without your personal and direct intervention, it may not have worked. The people of Nigeria also supported me massively. The youths were wonderful, always encouraging, backing me up on social media,” Okonjo-Iweala said.

“Mr President, the world recognizes what you have done. Since its establishment, only men have led the WTO. Now, a woman has emerged for the first time, and she’s a Nigerian. We are so honoured.

“WTO will do more to help Nigeria, but we need to add value to our products in order to trade more. We should exploit all the opportunities in front of us.”

On his part, Buhari said although his government supported Okonjo-Iweala, her track record also helped her in clinching the job.

The president said Okonjo-Iweala was putting Nigeria more on the world map, adding that he knows she will represent the country well.

“You also earned it. We are happy you made it, but you earned it with your record of performance both at home and abroad,” Buhari said.

The president expressed confidence that Okonjo-Iweala will represent the country well on the global stage.