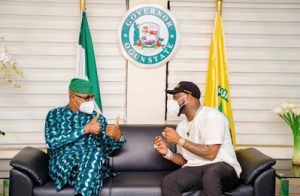 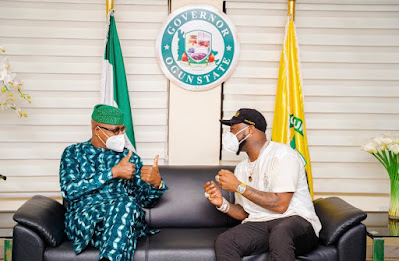 The ‘OBO’ crooner was spotted together with Ayefele on stage at an event in Abeokuta, Ogun state, on Friday.

In several video clips from the event, the ‘Risky’ singer is seen dancing as the owner of Fresh 105.9 FM, a popular radio station in Ibadan, Oyo state, performed some of his hit songs.

The development comes at about the same time when the ‘Assurance’ crooner paid a visit to Dapo Abiodun, the state governor, in Abeokuta.

Abiodun took to his Twitter page to share photos of the pair at his office during the visit.

He, however, did not disclose the purpose of Davido’s visit or what they discussed during the meeting.

“This evening, I received @davido; a superstar songwriter, singer and producer, in my office at Oke-Mosan, Abeokuta. #BuildingOurFutureTogether #ISEYA #OgunState,” he wrote.

This evening, I received @davido; a superstar songwriter, singer and producer, in my office at Oke-Mosan, Abeokuta.#BuildingOurFutureTogether #ISEYA #OgunState pic.twitter.com/Mvb7f6wBsg

The music star had recently also met with Timipre Sylva, minister of state for petroleum resources.