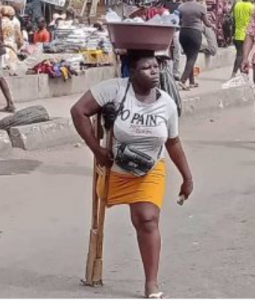 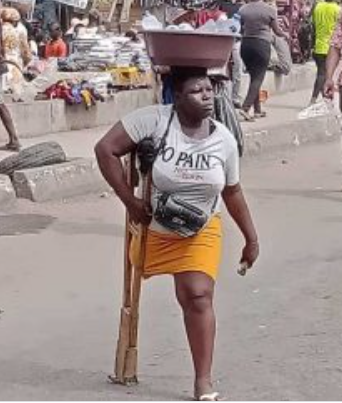 This is the tear-jerking story of Mary Daniel, an amputee who hawks on the streets of Oshodi in Lagos in a bid to make ends meet and earn a living.

26-year-old Daniel is a single mother to a two-year-old daughter.

She shared her touching story in an exclusive with PUNCH.

Born in Katsina, Daniel’s life changed at 11 when she was involved in a fatal accident that claimed the lives of her parents and left her without a right leg.

This however didn’t stop her from going back to school, even though she dropped out in JSS3.

She soon took solace in hawking moving from Anambra to Delta and then Lagos.

Daniel revealed how a man she was supposed to marry in 2018 dumped her after she got pregnant.

She recounted, “I relocated to Onitsha (Anambra State) and started selling sachet water. I use the gains I make to feed myself and send some money to my grandmother in the village. She is over 70 years old and I don’t want hunger to kill her.

“In 2018, grandma told me a man in the village wanted to marry me and she asked me to come home. While we were dating, I got pregnant but he denied being responsible for the pregnancy.

“Out of shame, I relocated to Asaba (Delta State) and continued hawking sachet water. I squatted with a woman from our village for some months before I rented an apartment.

“A car brushed my arm while I was hawking in traffic. I was heavily pregnant then. One man saw me bleeding and gave me N100,000. I used the money to rent a small apartment and bought some baby things. I gave birth in 2019.”

She only had a two-week ‘maternity leave’ before she returned to the streets, manoeuvring the traffic to sell water with her baby strapped to the back.

She also disclosed that she decided to come to Lagos just two weeks ago.

“I decided to come to Lagos about two weeks ago because I was not selling well in Asaba. I sold my home appliances to raise the fare. My daughter is with the woman I lived with in Asaba. She is now in Ayingba with my baby. My grandma didn’t know I am now in Lagos. Last week, I sent N8,000 to my grandma and I want to send N10,000 to her again this week. I am the only one taking care of her.

“I met with a woman selling noodles and I explained my plight to her. She linked me up with one Alhaja from whom I buy packs of bottled water. I buy a pack for N600 and make N240 gain. I sell six to eight packs per day and make a profit of N1,000 to N1,500. I save N500 daily. I want to send the money for the upkeep of my daughter at the end of the month.”

Doing this business is not without its many risks as Daniel says passengers have made away with her money on two occasions.

Despite being an orphan and physically challenged, she is not bogged by her adversities and hates begging.

“I don’t like begging because I believe I have the strength to work and cater for myself,” she declared. “I know I am not lazy and I took the decision not to beg. Some who are begging don’t even make as much as I do daily. Some people, out of pity, will gift me N1,000 or N2,000 after buying water from me.”

She added, “I wish to have a shop of my own so that I can have a better means to take care of my daughter and grandma. I used to have one artificial leg but it was painful whenever I wore it. So I decided to be using a crutch.”

The post ‘Hunger Will Kill Me & My Daughter If I Don’t Hawk – Single Mother Amputee Reveals appeared first on FabWoman | News, Style, Living Content For The Nigerian Woman.

Why we told our children about their mum’s r.a.p.e ordeal –Timi Dakolo

Why we told our children about their mum’s r.a.p.e ordeal –Timi Dakolo

Singer, Timi Dakolo, has revealed that he and his wife, Busola, informed their kids about her r.a.p.e ordeal when she spoke...

I am only commenting to troll Ladun as they have collected the love of her life….pele – Newyorker