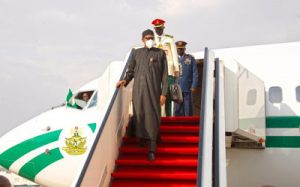 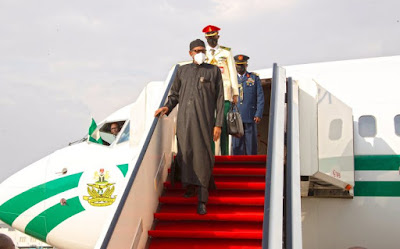 President Muhammadu Buhari has returned to Nigeria from London, where he has been taking a short rest.

Buhari arrived at the Nnamdi Azikiwe International Airport at about 4.45 pm on Thursday.

Among those who received him at the airport were Ibrahim Gambari, his chief of staff; Muhammed Bello, minister of the federal capital territory (FCT); Babagana Monguno, national security adviser, and other security chiefs.

Buhari departed for the UK on March 30 for what the presidency described as his “routine medical check-up.”

The president later said he was taking a “short rest” in London in a letter to Abdullah ll Bin Al-Hussein, the king of the Hashemite kingdom of Jordan.

DURING HIS LATEST MEDICAL TRIP…