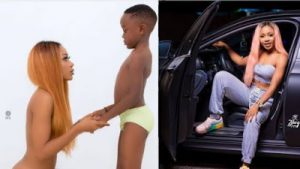 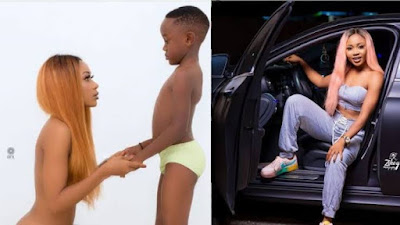 The Accra Circuit Court has delivered its verdict against Akuapem Poloo for posing nude with her son to mark his seventh birthday.

According to reports, On June 30, 2020, the prosecutor said the actress celebrated her son’s (name withheld) seventh birthday and took a nu-de photograph together with her son half-naked and posted same on her Instagram page which went viral on social media.

According to Chief Inspector Asantewa, “the conduct or behaviour of the accused undermines the privacy or likely to detract the dignity of the son.”

Following the complaint, Akuapem Poloo was arrested and admitted posting the n.u.d.e picture together with her son unintentionally in a statement to the police.

According to the prosecutor, the write-up text on her post reads: “I’m naked in front of you because this is how naked I was giving birth to you, so in case you find me lying somewhere, don’t pass by but see me as your mom who brought you to life,” indicated that Akuapem Poloo deliberately posted the n.u.d.e picture together with her son.

This follows her conviction by an Accra Circuit Court on Wednesday, April 14, 2021, over nude photos with her son which she shared on social media in 2020.

Following her guilty plea to three charges leveled agaianst her, Poloo was handed a 90 -day sentence by the trial court.

The court presided over by Her Honour Christina Cann deferred her sentencing to today, April 16, 2021, for Poloo to undergo a pregnancy test to ensure she was not pregnant before her sentencing is passed.

Her results came out negative, meaning she is fit to serve her imprisonment