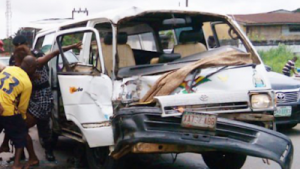 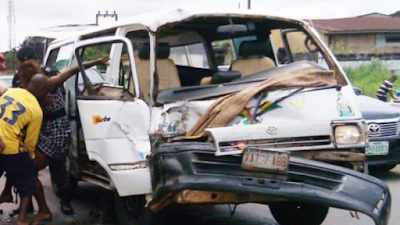 Two nurses were confirmed dead on Sunday, while 10 others sustained injuries in a lone auto crash involving a Toyota Hiace bus around Akinale Village on the Lagos-Abeokuta Expressway.

Babatunde Akinbiyi, a spokesperson for the Traffic Compliance and Enforcement Corps (TRACE), confirmed the incident.

He explained that the crash, which occurred at 9:20 a.m., was caused by speeding and using a mobile phone by the driver.

He noted that 18 people were involved in the crash, which comprised one male and 17 female nurses.

“One of the survivors said the driver of the Toyota Hiace bus, marked OG 49A 07, who was speeding and as well using his cellphone while driving around a bend, lost control and somersaulted several times.

“The occupants in the bus were nurses who were all heading to a party to honour a matron in one of the hospitals in Abeokuta,” he said.

Mr Akinbiyi explained that the injured were evacuated to Hope Hospital, Adigbe, Abeokuta, while the two corpses were deposited at the morgue of the General Hospital, Ijaye in Abeokuta.

The TRACE spokesman urged motorists to avoid speeding, especially during the rainy season, and not to use a mobile phone while driving.

He said most crashes were avoidable.