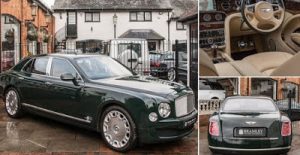 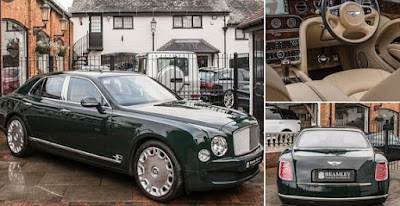 A low mileage motor with full-service history and one careful lady owner provides the ideal patter platform for any car salesman.

And when that lady happens to be the, ahem, Queen of England, you know the car is in perfect condition — next to new.

The Bramley Motor Car showroom near Guildford in Surrey are offering – a beautiful ‘Barnato green’ Bentley Mulsanne, retired from the Queen’s fleet in 2015 and with just 2,492 miles on the clock.

Bramley marketing manager Jack Morgan-Jones told MailOnline: ‘We are quite fortunate in the sense that we have had a couple of Royal cars.

‘We sold a Range Rover last year that was used to transport the Obamas on their state visit and Prince Philip famously drove it.

‘The Queen’s Bentley is such a unique car. It is fundamentally no different to any other Mulsanne but it has a fantastic history with it being owned by Her Majesty which is lovely.’

The Queen has come a long way in terms of car ownership since she learnt to drive at the wheel of a First-Aid truck in the Second World War.

Her current Buckingham Palace fleet is said to include three Rolls-Royces, three Daimlers and two Bentleys and there are further fleets at her different properties.

The one now for sale was used to transport the monarch around the capital between 2013 and 2015.