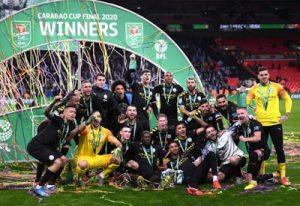 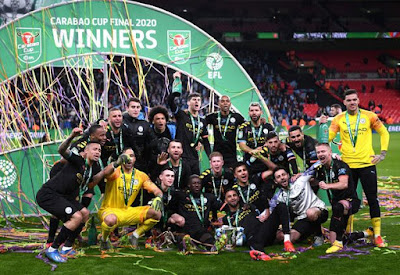 Manchester City claimed a fourth consecutive League Cup on Sunday with a dominant display to beat Tottenham 1-0 in front of 8,000 fans at Wembley.

For the first time in 13 months, a football match in England had designated fans from both teams inside the stadium in one of a series of test events at Wembley as coronavirus restrictions are eased.

However, they remain on course for a treble with the first leg of their Champions League semi-final against Paris Saint-Germain to come on Wednesday before possibly sealing the Premier League title next weekend.

Pep Guardiola’s men played like champions as after a slight dip in form in recent weeks, they pinned Tottenham back from the first whistle and should have won by a far more comfortable scoreline.

Spurs sacked manager Jose Mourinho on Monday amid a chaotic week as both City and Tottenham also quickly withdrew from plans to join a European Super League.

But City looked in a different league from the off as they peppered Hugo Lloris’s goal without finding the breakthrough.