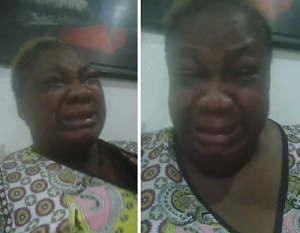 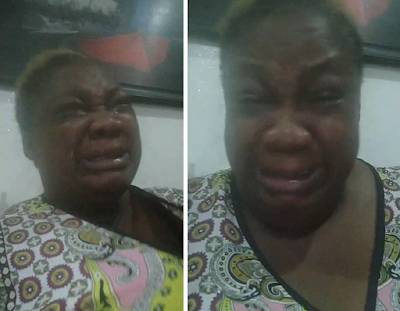 Comedienne Princess has finally opened up, about the r3pe accusation on popular Yoruba actor, Baba Ijesha.

In a video shared on her instagram page this morning, Princess said the girl baba ijesha molested is HER DAUGHTER.
She is one of the children put in her care when she lost a baby shortly has her marriage packed up.
Below are the videos and transcript of what the comedienne said. She actually called the police for him.

”Good morning Everyone I have heard and read so many things in the last few days and I don’t wish anybody should go through what I’m going. Some years ago I had challenges with my marriage so I lost a baby, then parents at my area asked their kids to stay with me so I won’t feel lonely. They were three boys and three girls.

Baba Ijesha had challenges so he came to me for help I tried my best, I registered him for GCE he was enrolled into UNILAG. The day he came for more help, I wasn’t going out, the children (boys) went to play and the other girl wanted to follow them, my aunt had come to visit me earlier and he was there so when she was leaving I had to go downstairs to lock the gates, I didn’t know what happened in the space of three to four minutes but the following week the school called me that I should come and see my children. That the girl sat on the boy’s leg and was shaking her waist, their parents were called as well and they are strict born again Christians.

I don’t even allow them watch cartoons alone I watch cartoons with them. The parents said may it’s spiritual so we started praying. he ( baba Ijesha) warned her not to tell anyone so he came back the next day to confirm if she told anyone, he then took her downstairs to help him get fruits from his car because he said he bought it for everybody. When she went down with him he defiled her again with his key, he never came to my house again, anytime he needed help he would call me. When I read the news that he has been defiling her for seven years I said why? we are just finding out and he never came to our house again but I noticed that he was avoiding me I didn’t even know why.

Later, the child started failing in school despite paying for extra lessons everyone said it’s spiritual that we should continue praying their parents kept them (six children) with me because they believe if they were with me God will answer my prayers. I kept on insisting that something was wrong but my family questioned me of not having faith that we should keep on praying and fasting.

Last year all the children were to go back to boarding school they are all grown up now, my friend advised I adopt a child so I won’t feel alone at home but it was impossible because of Covid-19. I decided to go and adopt the child last month before school resume but I told them shouldn’t we sort out this problem that has been ongoing for seven years first … I suggested we changed her boarding school. For over 14years I have been taking care of sexually molested people including those who are victims of domestic Violence, I give them shelter.

Is it because he is a popular actor? when my friend questioned this girl she opened up, I was shocked, I sent him a DM to call me because his line was unreachable I told him that I wanted to shoot a movie. I and my mum wanted to ask him questions if what she (girl) said was really true, when he was on his way I remembered what my friend said to me that people would want to support him if you don’t have evidence.

I called CCTV company to come and set cameras that it was a life and death issue. I instructed everyone to leave the house, I calmed the girl down because she was afraid she hasn’t seen him physically since 7years ago even she saw him in a movie recently that we did together she stated behaving somehow her brothers asked what was wrong but she couldn’t talk until now when she revealed everything to us.

When he came in he asked who are these people (CCTV workers) I told him they were DStv workers that I wanted to see them off and I would stay a bit longer that he should relax I dropped my phone then I left.

Two seconds he stood up and started checking my rooms to make sure none of the children were sleeping there he checked for cameras. Then he started, I can’t even relate all the things he did, I was shaking because we were monitoring it on the phone, at a point she stood up to go to the kitchen and there were no cameras there that was when everyone entered, they called the police, they came immediately and picked him.

I asked him why he did this to me he said it was the devil that I was his benefactor he was just talking rubbish. I asked him what happened 7years ago he told me and was begging, the police took him away. Everyday we go to the station from morning till night and some of you are saying we should post the video of the child that was molested , what will you gain? some people were even calling me to threaten me ,why?. Children are the heritage of God nobody is allowed to molest them even if you don’t like me as a person please stop talking all the rubbish.

The police have started their investigations .he has confessed four different times, why would you want to see a footage of a child being molested? if you think I’m lying why don’t you wish it on your children or go and see him there at Panti police station and ask him. Why would I want to set someone up, a person that I’m helping. look at someone who claimed to be a rape survivor went online to say she wants CCTV footage of a child being molested when you came out to say that you were raped did we ask for a CCTV footage.

please I’m not okay stop saying what you don’t know even if you don’t like me please for the sake of these children, how do you want their parents to feel ?what will I gain? why are you being this insensitive? someone that I have been helping for years.

In a second video, She said;

Sorry that I’m crying it just that I’m in so much pains. the reason why I did this video is because this child has been failing in school and I kept on insisting that something was wrong even when everyone said we should continue praying and fasting. This child kept on failing woefully she was acting strange, her brothers couldn’t play with her.

Please don’t be afraid, if Baba Ijesha has molested your child before, your friend or neighbor or anybody you know DM me. I’m so careful I don’t even allow anyone near my children again. Parents don’t trust anyone, I went downstairs to see my Aunt off within three to four minutes see the damages he caused. please stop spreading lies that he molested her for seven years it’s not possible. people out side Lagos have brought their children to stay with me. if I wasn’t a careful person will I be insisting for seven good years, they said I was insisting too much that we should continue to pray that God will do something. What pains me most is that their parents trusted their kids to me.

The police are still investigating, I go there everyday and I make sure he sees me. Then he will start telling me sorry that she was the only child he has raped, but how sure is that? if you are out there and he has done such to you don’t hide DM me or come to Panti police station. if you like threaten me even if I die justice will be served if you like lay ambush against me justice must be served.

If Olanrewaju James aka Baba Ijesha has abused you or anyone else don’t be afraid DM me. No child or adult deserve to be molested.”