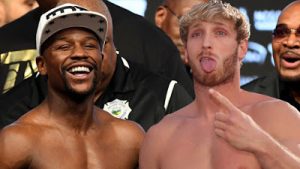 The match, which was postponed from its initial date in February, is set to take place at Hard Rock Stadium in Miami.

Mayweather broke the news on his verified Instagram page on Tuesday.

“Mayweather Promotions, Fanmio and Showtime Boxing have come together to bring an epic event,” the post read.

The five-weight division world champion last fought professionally in August 2017, when he knocked out Conor McGregor, the Ultimate Fighting Championship (UFC) star, in the 10th round.

Conversely, Paul, who has nearly 23m subscribers on YouTube, has only one fight under his belt, a split-decision loss to Olajide Olayinka Williams, aka KSI and a fellow YouTuber, in November 2019.

According to Fanmio, a platform that connects fans with celebrities through online experiences, additional details on the rules of the fight and the undercard will be released soon.