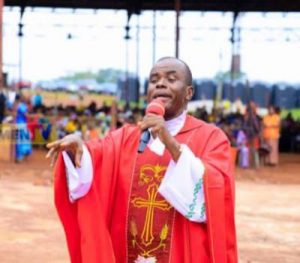 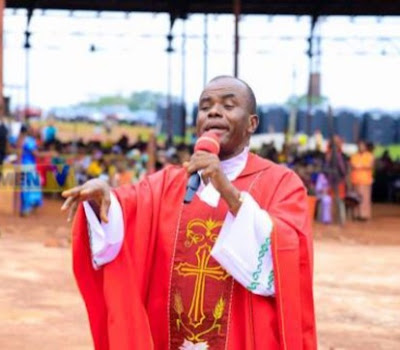 Supporters of the fiery Enugu priest, Rev. Fr. Ejike Mbaka, who are also members of the Adoration Ministry, Enugu, on Wednesday, protested the whereabouts of the priest.

It was reported that the Ohanaeze Ndigbo Youth Council Worldwide, OYC, raised the alarm that the priest was missing.

Mbaka who had asked President Muhammadu Buhari to resign or be impeached was last week attacked by the presidency while responding to the call.

The Presidency had claimed that the Cleric was attacking Buhari because he was refused a contract.

However, a protest has hit the coal city over the disappearance of the Priest whose whereabouts cannot be ascertained.

It was learnt that a notice calling on all youths of the ministry to the adoration ground.

The message inviting the youths to the adoration ground, obtained by newsmen read, “Important!

“Good morning friends and well-wishers. Please if you know you stand for justice and you do not want the lone voice that speaks for the poor in this country to be silenced, gather at Adoration ground let’s go for a protest at the Bishops court.

“Fr. Mbaka is nowhere to be found. He went yesterday to answer the Bishop’s call and up till now, he’s not taking his calls. Let’s gather! SSG.”

The Parishioners have now stormed the Bishop’s Court demanding that Bishop Calistus Onaga of the Catholic Diocese of Enugu should produce him.