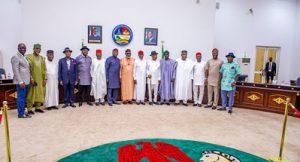 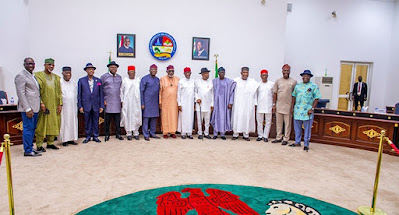 The Buhari Media Organisation, BMO, has asked governors of Southern Nigerian states to take their demands for restructuring of the country and other issues to the National Assembly.

BMO gave the advice to the governors of the 17 states of Southern Nigeria in reaction to the demands of the state chief executives after their meeting earlier in the week in Asaba  Delta State.

The Governors had also announced prohibition of open grazing of animals in the territories of their states while they called on President Muhammadu Buhari to initiate the process for the establishment of state police, convocation of national conference and restructuring of the country.

The Governors said the demands if acceded to will help to tackle the problem of insecurity and agitations for secession in the country.

But BMO in a statement signed by its Chairman Niyi Akinsiju and Secretary Cassidy Madueke on Thursday asked the Governors to forward their demands to the National Assembly instead of President Buhari if they are serious about them.

According to the group, National Assembly is in the right position to implement their demands, especially now that the legislative body is set to begin a process of constitutional amendment.

BMO said, “Like many Nigerians, we were excited that governors from Southern Nigeria set aside party differences to meet recently on critical national issues and agreed on some salient points, but we are surprised that they made some demands which they tied to a national dialogue.”

“While we are not privy to discussions that preceded the demand for restructuring, we found it strange that a gathering of Governors that included at least five former Federal lawmakers chose to ignore the place of the National Assembly in constitutional amendment, but opted for what is clearly not recognised as a legal body for constitution matters.”

“We agree with Nigerians who have come out boldly to say that any other process outside of what the Constitution prescribes, amounts to deceptively playing to the gallery as done by the previous administration, or an illegal move to compromise the constitutionally defined role of the National Assembly as the voice of the people.”

“Incidentally, the 17 governors met at a time the National Assembly was rolling out details of its forthcoming two-day zonal hearing on constitution review and the items listed for deliberations.”

BMO also noted that some of the issues to be discussed at the public hearing on the constitutional review include devolution of power, local government autonomy, fiscal federation, and revenue allocation, state police and judicial reform on election matters.

“We make bold to say these are all-encompassing issues that are in line with the clamour for restructuring so we are surprised that state governors, many of whom are former federal lawmakers, are mulling an illegal route to altering the Constitution.”

“We know however that President Muhammadu Buhari has always expressed his belief in processes and we dare say that he would not be a party to eroding the legitimacy and constitutional mandate of the National Assembly.

“So our piece of advice to not just the Southern Governors Forum, but also to all 36 State Governors is for them to take their demands to the National Assembly, ensure they are physically present at the zonal hearings, and subsequently mobilize their allies in the two legislative chambers as well as State assemblies to back their demand for political restructuring”.

BMO also asked the governors to implement financial autonomy for the judiciary and legislatures in their states even as they are clamoring for devolution of power.