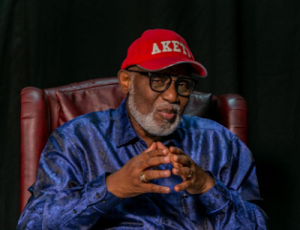 The organization’s comment followed a statement by presidential spokesman, Garba Shehu, on recurring herdsmen-farmers’ crisis in the country.

Shehu had announced that Buhari approved measures to bring an end to the skirmishes long before the ban on open grazing by the Southern Governors Forum.

The aide noted that the governors’ resolutions failed to proffer solutions to the crises, “that have been continuing in our country for generations”.

“Their announcement is of questionable legality, given the constitutional right of all Nigerians to enjoy the same rights and freedoms regardless of the state of their birth or residence”, he wrote.

In a rejoinder through his Special Duties and Strategy assistant, Doyin Odebowale, Akeredolu told Shehu to disclose the real motive(s) of those he serves.

“He can’t continue to hide under some opaque, omnibus, and dubious directives to create confusion in the polity”, it read.

But in a statement signed by BMO Chairman, Niyi Akinsiji and Secretary Cassidy Madueke said the governor’s position was an intemperate, reckless and spiteful outburst against the President.

The group said it was unfortunate that Akeredolu could sign off on a vitriolic press statement by Odebowale that not only calls to question Buhari’s decision but also a disguised attack on Shehu.

“We find it strange that a governor elected on the same platform as the President and whose rise to the position he presently occupies owes to President Buhari’s goodwill at a time the governor was not in the good books of the party’s influential leaders could hide behind an uncouth aide to throw subtle shade at his benefactor.”

BMO said Akeredolu, through his aide, gave the impression that Shehu was not speaking the President’s mind on the matter even though there was a reference to a commissioned report that was the outcome of consultation with farmers and herders.

“The governor’s aide went ballistic, apparently without adequately comprehending the message, and proceeded on a rant that was not different from the inflammatory rhetoric Sunday Igboho and his co-travellers have been pushing out.”

BMO recalled Akeredolu attacked the presidency after its reaction to Ondo’s eviction notice to herdsmen in Ondo.

The group said the messages from the state government indicate that Sunday Igboho “may have been right when he claimed that he enjoyed the support of Governor Akeredolu for his secessionist agitation.

“It is becoming increasingly clear that Akeredolu has a partner in the political thug that is at the forefront of demands for a Yoruba nation despite his half-hearted attempt to dissociate himself from Igboho.

“Otherwise, why would his aide pretend not to know the difference between peaceful and law-abiding herdsmen who the ranches would be available to and those he called ‘denizens of the forests’?

“We are constrained to say that the statement by the governor’s aide reeks of malice, and the references therein are outright falsehood by someone out to misrepresent an innocuous statement from the presidency.