Omoooooooooooo! A man has been accused of killing a man who just returned to the country from overseas.

The man is said to have hired him o follow him around as a form of protection. Out of doing his job, he murdered him and stole his car.

He later buried him at a shallow grave behind his gas plant.
Omooooooo! Here’s how his friends put the story.

Another friend of the victim identified as Henry Kanu on Facebook wrote;

“This greedy idiot with police placard was hired as a Bakassi security guard to this young man on white. He (deceased) move with him almost everywhere he go, he eat what he likes, drink any type drink on the deceased account. He never treated him like a security guard.

Out of his greed and get-rich-quick syndrome, shot and killed his boss and buried him in a shallow grave behind his gas plant. Took his Venza (pix behind the idiot) to Port Harcourt with his gang to dispose but the buyer was wise enough to notice and called in the Police who wasted no time in arresting him (the Idiot).

Please let’s becareful, this world is turning into something else. REST IN PEACE MY BROTHER ENYINNAYA MARK OGBONNA YOUR KILLER WILL KNOW NO PEACE.” 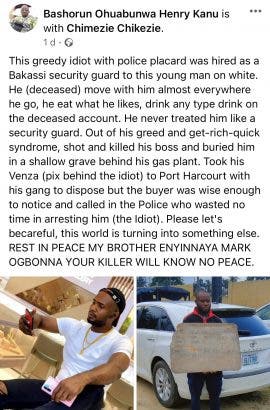