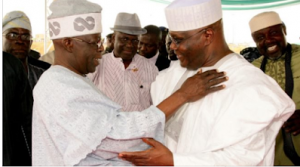 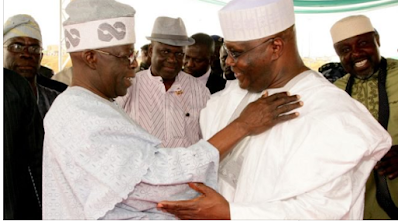 Bola Tinubu, National Leader of the All Progressives Congress, APC, on Saturday reacted to the viral video of him meeting with Atiku Abubakar, former Vice President in Abuja.

Tinubu cautioned Nigerians making an “issue” out of the meeting with Atiku.

The APC National Leader explained that he only exchanged pleasantries with the former presidential candidate of the Peoples Democratic Party, PDP, at the airport.

Tinubu had met and exchanged pleasantries with Atiku, a chieftain of the PDP at the Nnamdi Azikwe International Airport in Abuja on Friday.

Atiku had arrived from the United Arab Emirates (UAE), at the same time that Tinubu was within the airport premises.

Upon his arrival, the former Lagos State governor had walked towards Atiku as he alighted from his vehicle and they exchanged pleasantries.

Despite political leanings and different party affiliations, both prominent politicians are known to be longtime allies.

But some Nigerians while reacting to the exchange of pleasantries, cautioned others against trusting politicians.

However, Tinubu has asked those who are not happy that he greeted Atiku to have a rethink because as they are friends.

He made the remarks through his spokesman, Tunde Rahman.

In a tweet titled: “On the @AsiwajuTinubu @atiku Video at Abuja Airport,” Rahman wrote: “Former Vice President @atiku had arrived first and was in his car about to leave when @AsiwajuTinubu arrived.

“As he was informed about him, @AsiwajuTinubu walked up to @atiku vehicle to exchange pleasantries with him.

“Those making an issue out of this noble gesture should have a rethink. For the life of me, are they saying if two persons know each other and are friends, they must not greet each other as mature persons again because they find themselves in opposing political parties? If that’s their thinking, this is a warped idea!”